SUMMARY: As of August 2017, the US is on track to approach 1,000 deaths of civilians at the hands of police for at least the third year in a row. This brief provides an overview of existing evidence documenting police-related killings of civilians, and suggests key strategies to mitigate the disparate health impacts resultant from those acts of violence.

BACKGROUND: In 2015, independent groups and investigative journalists began to document in earnest the numbers of civilians killed by police officers. After the public uproar from the highly visible 2014 police killings in cities such as Staten Island, NY Ferguson, MO and more, FBI Crime Report data showed the government had grossly underestimated the number of killings by law enforcement by more than half. At least 1,152 people were killed by police in 2015 alone.[1] In 2017, so far 611 people have been shot and killed by police, which is 15 more people than this time last year.[2] It is true that armed White American males are killed in the highest numbers by police officers. However, minority males, especially unarmed Black males, are disproportionately killed by police compared to their percentage of the US population. 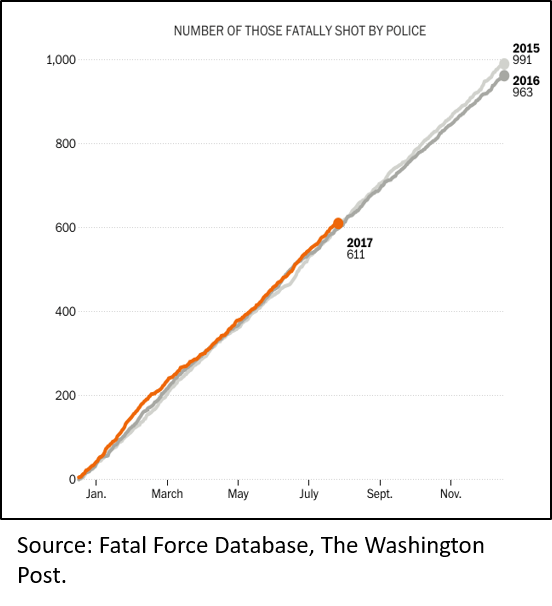 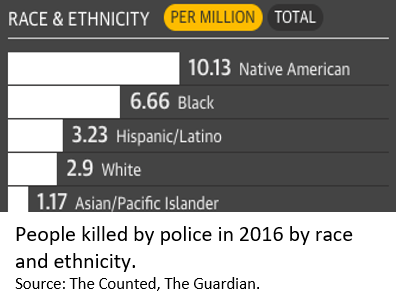 This year, African-American males, who make up only 6% of the US population, remain the unarmed group most often killed by police, at 26%.[4] Bystander and body-camera recordings have attributed to increased visibility of these killings, but the country seems to have advanced only in the technology by which it tracks police violence in this country, not in any methods to prevent the untimely and disproportionate deaths of minorities.

ANALYSIS OF KEY HEALTH EQUITY CONCERNS: Health disparities suffered by minorities in this country are well-established. Black men have the lowest life expectancy in the United States as the group most likely to die from conditions such as heart disease, stroke, and even treatable cancers like prostate cancer. Hispanic men are twice as likely to die of diabetes complications than White men. Black men are also 53 times more likely die from homicide than white men.[5] Adding to these existing disparities are significant population health impacts of police-related killings. [6]  Underlying racial biases that lead to policies resulting in increased searches and arrests of, and violence against racial and ethnic minorities also deserve critical attention. For example, Hispanics make up only 17.6% of the population, but compose 30% of arrests and 23% of all searches.[7] There has also been shown to be a correlation between the number of stops by police and the invasiveness of police encounters with increasing levels of stress and anxiety, even resulting in biological shifts in the brain’s reasoning.[8] Black men report more anxiety and post-traumatic stress disorder (PTSD), and more morbidity from these psychiatric conditions, than their white counterparts.[9] As a final piece of evidence against the practice of increased policing of minorities, researchers have shown in multiple studies that more searches and seizures has not had an association with reductions in crime, and that when whites are stopped they are more likely found to carry contraband than minorities.[10]  The trauma wrought on minority Americans from racially-motivated over-policing and violence is considered influential enough on the overall health of minority Americans that public health researchers have recommended that police-related killings should be reportable or notifiable conditions.[11]

RESEARCH RECOMMENDATIONS: Several steps can be taken to thoughtfully advance the evidence base on the health equity impacts of police-related killings. First, we advocate for support of the ongoing measurement and documentation of police-related killings, in a database that is easily accessible to all civilians. Second, we recommend studies that measure the longitudinal public health burden of police-related killings, of unwarranted searches and arrests, and imprisonment of minorities. Third, we recommend investigating the effectiveness of interventions addressing racial and ethnic bias within the US police force. Research has shown that trainings that address implicit bias are effective, and that belief in stereotypes can change, but more investigation is needed to determine if there is sustained behavior change after formal instruction has ended.[12]

Fourth we recommend investigation in methods for improving community mental health in the wake of police killings.[13]

CLINICAL PRACTICE RECOMMENDATIONS: Outside of treating the physical ailments of nonlethal violence inflicted upon their patients, clinicians can incorporate secondary prevention to address the mental health consequences of police violence by screening for depression, anxiety, PTSD or other psychological trauma. Clinicians should be educated on what makes an individual high-risk for positive screening, and on culturally appropriate methods for conducting these screenings.[14] Members of clinical teams who are trained in trauma-informed care (TIC) should be engaged in addressing the psychological and mental health outcomes of police-inflicted violence.[15] TIC training will be most important for those clinicians who have a direct experience with, and proximal relationship to communities that suffer violence by police at a disproportionate rate (that is, minority physicians, and first responders who work in communities of predominantly minority patient populations). Further, these clinicians will need greater support and training for self-care methods to address compassion fatigue and secondary traumatic stress.[16]

POLICY RECOMMENDATIONS: Implicit bias screening and education should be the hallmarks of policy enacted to discover the root causes that lead to unnecessary police violence. Ample research shows that preconceived negative stereotypes about minorities will influence an officer’s decision to mischaracterize a situation or individual as threatening, and to shoot their firearm at a suspect.[17],[18] Systems-level changes should be considered as well, and may prove to be more reliable methods to change improper practices until it is determined which interventions are most effective at addressing implicit biases. Systems-level changes can include, for example, a change in hiring practices to focus on individuals with higher executive functioning who exercise better self-control and reasoning. Others advocate for adding objectivity to standard policing procedures, by adding checklists to routine protocols like traffic stops, and delegating interrogations or paperwork to officers not directly involved in the pursuit and arrest of a suspect.[19]

CONCLUSIONS: The disproportionate killings of minority civilians by police officers has reached the public consciousness at a tenuous time in the country; many watch on and feel paralyzed by the enormity of the tragedy. As health care providers and researchers, taking a stand in professional spaces against police brutality may be a challenge, but it is required because of the damaging health implications to those entrusted to our care. Our unified endorsement of systems-level policy changes, clinical calls-to-action, and research priorities will engender a positive change in the attitudes and relationships between the police and the communities they serve. Our duty as scholars, and as citizens, is to decrease dissonance and implement collaborative solutions to this issue.

[3] The Guardian (2015). The Counted: People killed by police in the US. Retrieved from https://www.theguardian.com/us-news/ng-interactive/2015/jun/01/the-counted-police-killings-us-database.

[10] Bump P. (2016). The facts about stop-and-frisk in New York City. The Washington Post. Retrieved from https://www.washingtonpost.com/news/the-fix/wp/2016/09/21/it-looks-like-rudy-giuliani-convinced-donald-trump-that-stop-and-frisk-actually-works/?utm_term=.0e7cf4079081