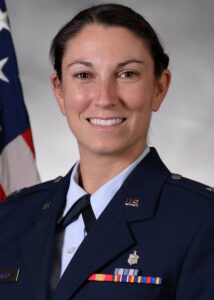 Anne Marie Kennedy, DO, a 2022 Faculty Development Fellowship graduate, recently joined a newly formed team at Offutt Air Force Base in Bellevue, NE, whose purpose is to identify barriers to female and family-centric readiness during service. The goal of the group, called Warhawk Athena, is to solve any Offutt-specific issues at a local level and funnel up issues that require higher coordination to the regional or Department of the Air Force Major Command (MAJCOM). The team had its first conference in September 2022, with over 50 participants from across the installation coming together for four days to crowdsource issues they experienced around the base. Each group chose an initiative they would work on post-conference, and at the end of the conference, the groups briefed base leadership with “shark tank” style pitches. After taking feedback on their problem statements and proposing a way forward, the groups moved forward to continue work on their initiatives. From Dr. Kennedy, “In November, we briefed our findings and way forward to our Wing Commander and our Command Chief. It was incredible! The teams have already accomplished so much, and some of the initiatives are going to be brought to our regional conference this upcoming Spring as well as being pitched up to the Women’s Initiative Team for the Air Force.”

Kennedy is part of the Commander’s Action Group (CAG), working with the Wing Commander (head boss) of Offutt Air Force Base. We are proud of our fellowship alumni who are leading important initiatives and leading in medicine and beyond nationally, and are honored to be able to serve those who serve.