Dr. Won’s research interests are focused on bridging the gap between genetic risk factors for psychiatric illnesses and neurobiological mechanisms by decoding the regulatory relationships of the non-coding genome. 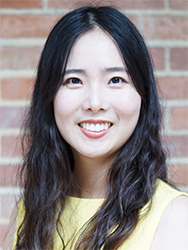 As an undergraduate in the Department of Biological Sciences at KAIST (Daejon, Korea), Hyejung was involved in research on the neurobehavioral characterization of Git1, Irsp53 and Dgk knockout mice in the laboratory of Dr. Eunjoon Kim.  She pursued her PhD in the same laboratory with a project focused on autistic-like behaviors in mice with Shank2 deficiency, completing her degree in 2013.  Since 2013, Hyejung has been a postdoctoral fellow in the laboratory of Dr. Daniel Geschwind at UCLA, where she studied chromosome conformation during human neurogenesis.  Dr. Won is the recipient of an NIH Pathway to Independence Award (K99/R00) from NIMH.  In addition to her appointment in Genetics, she is also a full member of the UNC Neuroscience Center.

The Department of Genetics is pleased to welcome Dr. Won!

Hyejung is located in 7109A Neuroscience Research Building and can be reached at hyejung_won@med.unc.edu.