To identify early signs of developmental problems in infants from 11 to 16 months of age using the First Years Inventory (FYI), and then to test an in-home parent coaching intervention that we believe will help infants who are at risk for later developmental problems such as language disorders, sensory regulation problems, and autism.

The study is designed as a randomized comparative trial. We are recruiting 44 infants at-risk for developmental disorders and their caregiver(s).

The 13 in-home coaching sessions are designed to increase the amount of time infants spend in joint engagement with their parents during daily routines. Half of the intervention sessions focus on sensory regulation and half focus on pre-linguistic communication skills. Families are randomly assigned (like a coin flip) to start with one domain or the other, but all families receive coaching in both domains. Though PIE is made up of evidence-based practices, this is a “proof of concept” study, which means that the PIE intervention has never been tested before with infants at higher likelihood for developmental problems and the intervention may evolve as we learn from families in the study.

As part of the assessments for this study, we are collecting physiology (heart rate and sweat) data on children while they watch a short video and play with their parent. The parent wears chest electrodes and the child wears electrode stickers on their chest and left foot. We will help prepare children for this painless but unusual experience. 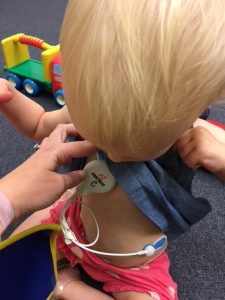 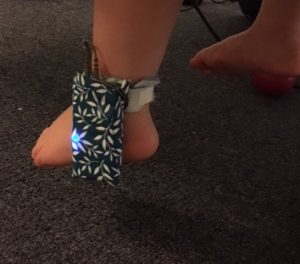 This study is funded by a Eunice Kennedy Shriver National Institute of Child Health and Human Development (NICHD) R21 grant awarded to Dr. Linda Watson and Dr. Grace Baranek. This is a registered clinical trial.