Katie is from Ocala, Florida, described as the horse capital of the world. With her two sisters, she grew up playing the piano and riding horses. While Carolina blue and Michael Jordan were prominent in her childhood, she stayed in state for college, attending the University of South Florida in Tampa for both undergraduate and medical school. As a medical student, she joined the USF Health a cappella group and taught yoga to classmates. During residency, she became involved in helping develop the Medical Education elective, training residents in MAT, and helping lead sessions related to equity in relation to treatment of patients with opiate use disorders. She has a passion for outpatient medicine and is ecstatic to be the outpatient chief this year before she pursues a career in GIM. She also loves cats and has a tuxedo cat named Winston (aka tuxedo cat).

Mike was born in Syracuse, New York, where he grew up with his three older siblings. With an internist for a father, he has always been fascinated with the breadth of clinical care afforded by internal medicine. He attended Georgetown University for his undergraduate degree and Stony Brook University for medical school, where he was inducted into the Gold Humanism Honor Society. While he remains a Georgetown basketball fan, he has enjoyed rooting for the UNC basketball and football teams since moving to North Carolina. His interests include all things music, golf, baseball, and travel. He looks forward to working on resident and medical student education this year. He will pursue a career in Pulmonary and Critical Care Medicine.

Daniel was born and raised in Jackson, Mississippi and attended Ole Miss for his undergraduate years, where he studied physics. He is a lifelong Rebel and knows the pain of a cheering for bad football teams. In addition to studying Ole Miss football, Daniel enjoyed learning about the theories of relativity. He put this to good use by spending time researching black holes with the LIGO team. He later attended medical school at the University of Mississippi Medical Center, where he met his wife, Jessica Duddleston (an ophthalmology resident at UNC!). Daniel and Jessica couples-matched at UNC after meeting his hero and fellow Mississippian, Dr. Andrew Greganti (everyone’s hero, really). In his spare time, Daniel enjoys spending time outside, playing golf, traveling, cooking, and watching sports. He is interested in pursuing a career in cardiology.

Hillary, originally from Asheboro, NC completed her undergraduate work in Nutrition and Biology at NC State and started wearing both red and Carolina Blue when she attended UNC for medical school. During her training, she developed a passion for quality improvement and participated in multiple QI initiatives, including UNC’s Code Sepsis Project and received a 2021-2022 Institute for Healthcare Quality Improvement grant for the implementation of a patient deterioration scoring system. Her academic and clinical interests include point-of-care ultrasound, curriculum development, clinical research and quality of life in the geriatric population. Hillary is the author of several children’s books, including most recently, The Sweetest Victory. She is excited and honored to serve as the 2021-2022 Internal Medicine-Pediatrics Chief Resident and will be applying for geriatrics fellowship.

His name is De-Vaughn, but family and friends sometimes call him Monty. Born and raised in Boynton Beach, FL, he attended the University of Florida in Gainesville where he received a degree in food science and human nutrition. He remained at UF for medical school and was very involved with the student-run free clinics and elected into the Gold Humanism Honor Society. De-Vaughn enjoys reading on topics of faith, fantasy, and mystery, as well as gardening, dancing, and experiencing new foods with friends. He is considering general internal medicine. 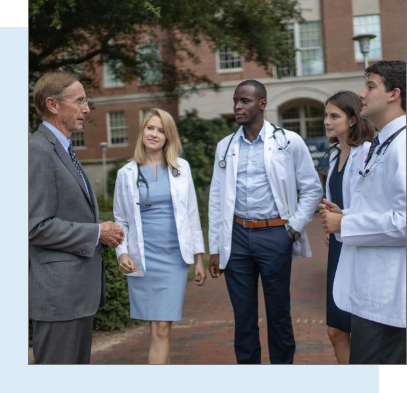 “Hands down this is the premier place for clinical training, where you’re put in a position to succeed every step of the way.”