Within Host Diversity of Malaria Infections

A major focus of IDEEL@Carolina’s research has been studying the diversity of malaria parasites both within populations as well as within people. Early on, our work focused on studying drug resistance and outcomes of clinical trials and the impact that with-in host diversity might have on interpreting studies. We were the first investigators to report on the presence of low level variants containing drug resistance in polyclonal malaria infections. These “minority variant” parasite strains in these infections have the potential to act as a reservoir of rug resistance in a population. This could limit the re-introduction of drugs to areas where sensitive parasites have repopulated after withdrawal of an antimalarial therapy. These minority variants also have the potential to lead to misclassification of results from clinical trials. We showed that WHO recommended genotyping methods can miss variants within an infection potentially leading to misclassification of trial results and impacting drug efficacy estimates.

Key to this work has been the collaboration with Dr. Jeffrey Bailey at UMass (see Collaborators). Dr. Bailey’s group has been critical in developing the bioinformatic tools necessary for conducting these studies. His group has launched a free analysis tool, called SeekDeep, for analysis of deep sequencing data from polyclonal infection. This tool is not only applicable to malaria, but can be used to analyze microbiome data or other systems in which more than one strain infects the same host.

The advances in bioinformatics has allowed us to now use these tools to track the relative frequency of parasite strains with-in individuals over time. Using these tools, IDEEL@Carolina investigators have found parasite strains that clear more slowly in Africa to artemisinin combination therapies. The clearance half-lives are similar to those of artemisinin resistant parasites currently found in SE Asia. We are currently following up these initial results with a clinical study with our collaborators in Tanzania and Kenya.

As has been historically seen in India and Sri Lanka, when malaria control efforts are reduced, malaria resurges. However, it is unclear how malaria is being reintroduced to areas where control has waned. This reintroduction could occur due to immigration of infected people or mosquitoes. We do not know how quickly this occurs, what geographic factors are most important, nor the relative contributions of infected mosquitoes and people.

Ecologists use landscape genetics to measure geographic factors which promote as well as prevent dispersal of infectious diseases, as measured by genetic intermingling. For example, grey wolf populations are less genetically related the farther apart they are and if there are bodies of water intervening. Landscape genetics is just starting to be used to measure rate of disease spread, using the rate of gene flow as a proxy. While the rates of gene flow in malaria have never been measured, determinants of genetic distance (Fst/[1-Fst]) have been studied for P. falciparum isolates from different islands on the Comoros archipelago. Genetic distance tended to increase with increasing Euclidian distance, and to decrease as the numbers of travelers between islands increased. Our group has been keenly interested in studying how malaria moves through the environment across landscape, as knowledge of the factors involved are critical for helping with malaria eradication and elimination. As an example, we have used gene flow to study the importation of malaria to Guatemala from the Congo as part of UN Peacekeeping efforts.

Recently, in collaboration with our colleagues at the University of Massachussetts and Imperial College, we constructed maps of P. falciparum genotypes using molecular inversion probes.   We found little structure among neutral markers (not under selection) but marked geographic structure for drug-resistant parasites. 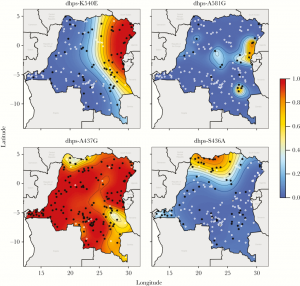 We recently completed the first national population-based study of P. falciparum parasites with deletions of the pfhrp2 gene, which produces the antigen (HRP2) detected by commonly deployed malaria rapid diagnostic tests (RDTs). RDTs currently account for 70% of malaria diagnoses in Africa and represent a major investment by multilateral donors. Because the vast majority of rapid diagnostic tests deployed in Africa are HRP2-based, pfhrp2-deleted parasites can escape detection.

Dr. Parr and Dr. Meshnick led a multi-disciplinary effort to describe the prevalence and evolution of these mutant parasites in the Democratic Republic of Congo (DRC), resulting in the discovery of two clusters of pfhrp2-deleted parasites. Initial population genetic analyses indicate that mutant parasites from these clusters are genetically distinct from wild-type parasites. Additional studies are underway to characterize their evolution using novel next-generation sequencing approaches and to understand their clinical impact. Through collaboration with the WHO and other partners, we are working to develop strategies for surveillance and improved policies for malaria control programs.

Molecular markers of resistance have now been described for many antimalarials and have been useful for helping to monitor resistance. IDEEL@Carolina investigators have been involved with studies of these molecular markers in multiple countries around the globe. Recent work has included studying how resistance to sulfadoxine-pyramethamine (SP) developed and segregated between Eastern and Western Africa in the DRC, the global distribution of SP resistance mutations and their implications for SP use in IPTp as part of the Malaria in Pregnancy Consortium, and the emergence of mefloquine resistance in SE Asia. They have also been involved in developing new ways to monitor these molecular markers. They were the first group to use a pooling approach to assay for drug resistance mutations using next generation sequencing. Using these techniques, they were the first group to publish on K13 mutations, the gene associated with artemisinin resistance in SE Asia, in a large scale survey of African malaria infections (>1,000 individuals).

The work on the NIH cross has led to a potential molecular marker of chloroquine resistance for P. vivax. Drs. Juliano and Lin are currently working with AFRIMS in Thailand and the Eijkman Institute of Molecular Biology in Indonesia to study these polymorphisms in natural parasite populations and to evaluate their relationship to chloroquine failure using well characterized clinical samples.

Drs. Lin and Juliano have been studying the population structure, demographic history and genomic signatures of selection on the P. vivax populations in Cambodia using whole genome sequencing. Their work suggests that modification of transcription regulation might underly vivax malaria’s resilience to control measures in the region. The work highlights the needs for a better understanding of transcriptional regulation in malaria in order to better inform elimination and control efforts.

Although tremendous gains have been made against malaria, global control and elimination are unlikely to occur without the development of an effective vaccine. Many of the candidate vaccine antigens for malaria are highly polymorphic in natural parsite populations, leading to concerns about strain specific immunity decreasing vaccine efficacy. IDEEL@Carolina investigators have been involved in characterizing vaccine antigen diversity for many antigen using our deep sequencing approaches including: 1) pfs25 and pfs48/45 in P. falciparum, 2) circumsporozoite protein (the antigen in RTS,S) in P. falciparum and P. vivax, 3) apical membrane antigen 1 in P. falciparum and 4) merozoite surface protein 1 in P. vivax.

These types of studies can help elucidate critical aspects of how the antigen interacts with the human immune systems. Currently, we have a large effort going into understanding the diversity of var2csa from P. falciparum in a project led by Dr. Meshnick. This antigen is the ligand responsible for malaria binding to the placenta. An effective vaccine targeting this antigen could prevent placental malaria, a leading preventable cause of low birth weight infants in Africa. This work is being done in conjunction with the Institute Pasteur.

Efforts to eliminate malaria altogether hinge on the ability to prevent transmission. Dr. Lin is working with investigators at AFRIMS to assess the effect of transmission-blocking drugs and other interventions on human to mosquito transmission of malaria in SE Asia. Since much malaria is asymptomatic and microscopic, we are interested in learning the contribution of the asymptomatic reservoir to ongoing transmission and which field deployable diagnostics are most suited to elimination efforts. We are also studying the genetics of the parasite in the mosquito stages to learn how mosquito-borne transmission affects the spread of drug resistance.

Plasmodium vivax is the second most prevalent malaria species in the world and causes much morbidity through its ability to reactivate from the liver and cause relapse. Interestingly, relapses of vivax malaria commonly occur after treatment of falciparum malaria. Safe and effective treatments are lacking, further complicated by the difficulty of distinguishing re-infections from relapse. IDEEL investigators have teamed with investigators in Thailand, Cambodia, and Indonesia to characterize genotypic signatures of relapse and are applying next generation sequencing techniques to samples from patients with multiple relapses as well as soldiers returning to non-endemic regions with known relapse. The long term goal of this work is to identify genetic determinants of relapse that can guide the development of new therapies.