Spotted Fever Rickettsioses, especially Rocky Mountain Spotted Fever, are major public health problems in North Carolina. Dr. Meshnick, working with Meagan Vaughn, a PhD student, and Dr. Charles Apperson, an entomologist at NC State, were able to measure the protective effectiveness of long-lasting insecticide treated clothing against tick bites. In a NIOSH/CDC-funded study, North Carolina park and forestry rangers were enrolled into a randomized controlled trial (RCT) in which the treatment group wore uniforms that were factory-impregnated with permethrin by InsectShield, a North Carolina-based company. Treated clothing prevented 82% of tick bites for a year. We also showed that it protected against both chigger bites and mosquito bites. 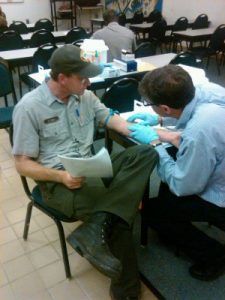 Lyme Disease one of the most common and serious infectious diseases in the US. Further evidence was needed to demonstrate the effectiveness of protective clothing in highly Lyme-endemic areas of the Northeast. Now, Dr. Meshnick in collaboration with Dr. Tom Mathers at the University of Rhode Island, are conducting a new NIOSH/CDC-funded follow-up study to measure the effectiveness of treated clothing in preventing bites from black-legged ticks, the vector of Lyme Disease. 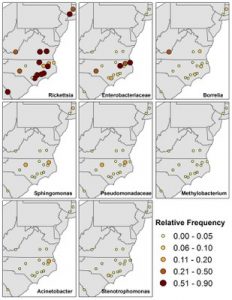