A new clinic for plagiocephaly opened at UNC Children’s Hospital in June. Kristi Hildebrand, MSN, CPNP-AC, has taken the lead to help treat infants whose skull may be flattened in one area due to repeated pressure.

The UNC Center for the Study of Retired Athletes has expanded its partnership with the NFL Players Association and is now seeing older players in a new initiative called the Milestone Wellness Assessment Program. Kevin Carneiro, DO, is the Associate Medical Director of the program. 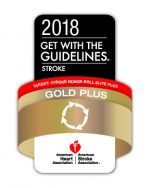 The Clinical Neurophysiology Lab has completed the upgrade of EEG monitoring equipment for Pediatric services to Natus. The upgrade will give the Pediatric EMU the ability to monitor up to six inpatients at a time and provide a better functional recording and review platform. The Clinical Neurophysiology labs as well as the UNC Sleep Center are currently in planning for the replacement of their equipment for all adult services in the coming months.

The offices of our new patient coordinators, Shama Benton and Tina Atwater, were moved back to the Physicians Office Building from the UNC Hospitals Spine Center in July. The move allows for implementation of a digital record system that eliminates the need for printed file copies.

Eldad Hadar, MD, was elected into the Society of Neurological Surgeons, the oldest neurosurgical organization in existence.

The Society’s initiatives are typically focused on neurosurgical residency education.

Kevin Carneiro, DO, was asked to chair the American Academy of Physical Medicine and Rehabilitation’s Bold Initiative to determine the future of musculoskeletal physiatry. 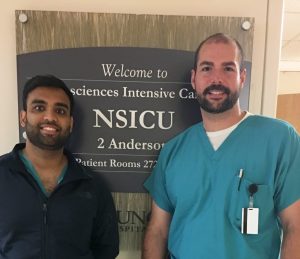 PGY 5 resident Josh Loewenstein, MD, passed the American Board of Neurological Surgery written exam for credit this year. This gives us a 100% pass rate for six years.

The UNC Neurosurgery residency program was re-accredited with no citations.

Visiting Professor Charlie Teo, MD, from Australia taught our lab on August 6 and presented grand rounds later in the week. Dr. Teo is an expert on minimally invasive eyebrow craniotomies.

Scott Elton, MD, and pediatric plastic surgeon Jeyhan Wood, MD, were co-presenters at UNC Surgery’s grand rounds on May 9. The topic was “Abnormal Head Shapes: Evaluation and Management of Plagiocephaly and Craniosynostosis.”

Chief resident Michael Cools, MD, presented “Facial nerve palsy following mild mastoid trauma on trampoline” at the American College of Sports Medicine Summit in May. The manuscript, co-authored with Kevin Carneiro, DO, was recently published in the American Journal of Emergency Medicine.

After a year of hard work, the CAPTIVE trial (genetically modified oncolytic virus combined with checkpoint inhibition) has opened at Lineberger and UNC Neurosurgery will play an integral role. Read more >

Kevin Carneiro, DO, is finishing up a study on “Nutrition for Chronic Low Back Pain” (lumbar radiculopathy) funded by the North American Spine Society and the Mayday Fund.

Gene Hobbs, CHSE, co-authored an abstract with the UNC Anesthesia team that was published in Simulation in Healthcare: “Validity of Simulation-Based Assessment for Accreditation Council for Graduate Medical Education Milestone Achievement.” June 2018

Kristi Hildebrand, MSN, CPNP-AC, attended the American Association of Neurological Surgeons course, “From Cranial to Spine: An Overview of Neurosurgical Topics for the Advanced Practice Provider,” held in Los Angeles from August 8-11. Along with two patients, Eldad Hadar, MD, and neurologist Hae Won Shin, MD, were featured in a WRAL news story about the Neuropace neuro-stimulator used for the treatment of epilepsy. A pediatric surgery car video featuring Carolyn Quinsey, MD, made the Channel 11 ABC news. UNC Health Care posted the original video on social media where it was shared widely and was viewed over 37,000 times!

The Pediatric Neurosurgery team has started writing regular features for social media on topics such as bike and car seat safety.

The 2018 Chief Resident dinner was held on June 16 at the Carolina Inn to honor our departing resident, Dr. Edward Yap. During the event, Drs. Sivakumar Jaikumar and Deanna Sasaki-Adams received the teaching award, Alana LeBlanc received the OR award, Dr. Michael Cools received the Elizabeth Bullitt award, and Samuel Reed received the Quinsey Student Research award. After six years at UNC, Eddie left us in June to pursue a one-year, cerebrovascular fellowship program at the University of Wisconsin.

Head for the Cure 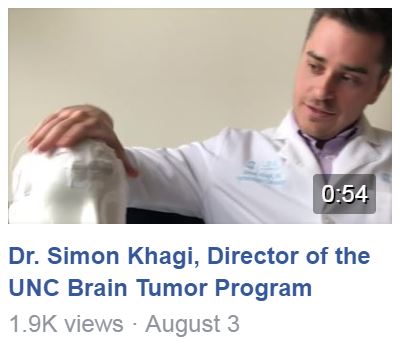 Join us for our largest event yet, now located in Southern Village, Chapel Hill! We’ve already raised more than $31,600, exceeding our goal of $30,000. Proceeds will benefit the UNC Brain Tumor Program and the NIH Brain Tumor Trials Collaborative. Dr. Khagi will be shaving his head at the event and running with the Optune device – watch his video. If you prefer not to run or walk, we need volunteers! See you on Saturday, September 8!  Register or donate > 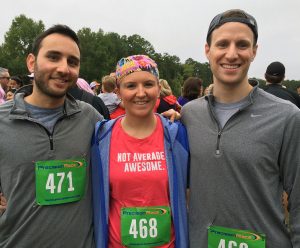 The Carolina Nursing Center for Lifelong Learning and the UNC Comprehensive Stroke Center will present a new educational program, “When Stroke Strikes: An Update on the Care of Patients with Acute Stroke” on September 7. The program is designed for nurses and other healthcare providers who would like to learn more about caring for stroke patients. More information >