What’s new in the Department of Neurosurgery

U.S. News & World Report named UNC’s Children’s Hospital to its list of “America’s Best Children’s Hospitals.” The publication also honored “Pediatric Neurology & Neurosurgery” as one of nine subspecialties that ranked in the top 50. The adult neurology and neurosurgery 2017 rankings will be announced soon.

The 2017 Chief Residents’ dinner was held on June 16 at the Carolina Inn to honor our departing residents, Drs. Jeffrey Aucoin and Adeolu Olasunkanmi.

During the event, Drs. Bhowmick and Sasaki-Adams both received teaching awards, Lindsey Tichenor received the OR award, Oluwaseun Omofoye received the Elizabeth Bullitt award, and Casey Hribar received the Quinsey Student Research award. In an introductory speech, Dr. Matt Ewend estimated that each of the graduating residents had performed at least 1,200 surgeries during their six years of residency training.

This month, Jeff started a one-year fellowship program at the Texas Back Institute where he will receive training in complex and minimally invasive spine surgery in several hospitals around the Dallas area. After completing his fellowship, Jeff plans to join a private neurosurgical practice in Utah. Ade has started a one-year spine fellowship at University of Wisconsin in Madison. 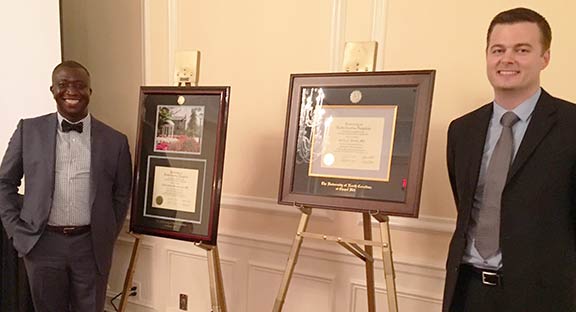 Deb Bhowmick, MD recently expanded his clinical practice through the addition of a tele-medicine clinic. The new clinic allows patients the opportunity to consult with him about 25 days sooner than an office visit, and saves travel time for long-distance patients. In addition, Dr. Bhowmick utilizes a digital imaging sharing service that transfers images to UNC from outside clinics and patients in a matter of hours instead of the days required by traditional methods.

The UNC Medical Center now publishes patient satisfaction feedback on its Find A Doctor website. The Center gathers and publishes the star ratings and comments for all of its providers using patient responses from the Press Ganey Medical Practice survey. At least 30 ratings must be received before they are published publicly. View departmental ratings here: Neurosurgery / Pediatric Neurosurgery

The Stroke Center again received the 2017 Gold Plus Award from AHA/ASA Get With The Guidelines-Stroke and moved up to the highest level of Target: Stroke – Target: Stroke Honor Roll Elite Plus. In addition, the UNC Epilepsy Center recertified as NAEC level 4.

Thanks to all who contributed through donations or participation in the 2017 Head for the Cure 5K. The event raised over $17,000 to support the Brain Tumor Trials Collaborative and the UNC Department of Neurosurgery. Special thanks to Dr. Simon Khagi for leading the effort. 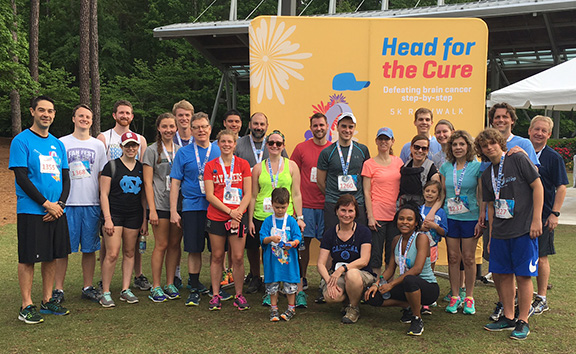 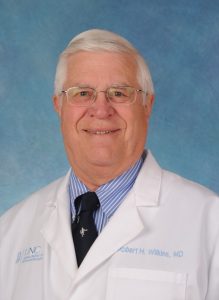 Robert H. Wilkins, MD, who served as the director of academics for the Department of Neurosurgery, passed away on Friday, March 31. Dr. Wilkins joined the UNC Neurosurgery faculty in 2012 with a focus on teaching and academics. In addition to his many academic and philanthropic accomplishments, Dr. Wilkins was thoughtful, dedicated and a true gentleman. UNC Neurosurgery will greatly miss him and his leadership. Read more >>

Deb Bhowmick, MD was named as President of the North Carolina Spine Society.

Melody Watral, CPNP-PC was elected to serve as the secretary/treasurer for the Oncology Nursing Certification Corporation Board of Directors for a two-year term (2017 – 2019).

Desiree Redman, BSN, CNOR was awarded the”40 under 40″ award at the National meeting of AORN in Boston, MA. This award recognizes 40 members nationally who have contributed to the professional development of OR nurses and are under the age of 40.

Diana Sasaki-Adams, MD will serve as a representative to the Association of American Medical Colleges (AAMC).

Last May, Kevin Carneiro, DO participated in the Ninth Annual Chancellor’s Faculty Entrepreneurship workshop, titled, The Entrepreneurial Mindset—Maximizing Faculty Impact. On April 21, Dr. Carneiro was the Grand Rounds guest lecturer at the University of Louisville where he gave a presentation on the future of spine care. On April 25, Dr. Carneiro spoke about primary care approaches to low back pain at the South East Area Health Education Center (SEAHEC) in Wilmington.

Simon Khagi, MD spoke about his research, the research process and clinical trials at the Join the Conquest “Meet the Researcher” public event on May 18.

Eldad Hadar, MD, along with other researchers, published in July’s Injury, “The effect of anatomic location of injury on mortality risk in a resource-poor setting.”

Kevin Carneiro, DO was part of a team whose research, “Validation of a Self-Monitoring Tool for Use in Exercise Therapy,” was published in the journal PM&R in April.

The NFL is funding a $2.6 million international study on the role of active rehabilitation strategies in concussion management, led by the University of North Carolina at Chapel Hill and the Medical College of Wisconsin. Kevin Carneiro, DO and resident Michael Cools, MD are members of the project’s UNC team.