This is part 2 of Dr. Krishna’s series. Read part 1 here. individuals whom I had the pleasure of knowing.

Ann (name changed), a seamstress who survived the Holocaust, was 86 when we met. She passionately expressed herself through her hand-made art.

Billy (name changed) was 82, a former biomedical engineer. A loving husband who dedicated himself to caring for his ailing wife, providing day-to-day support with feeding and grooming.

Both patients developed worsening tremors, which profoundly restricted their lives. They both chose focused ultrasound treatment. The surgery remarkably improved their tremors. While Billy remained tremor-free, unfortunately, Ann noticed the return of tremor after a few months. Consequently, she had to stop creating her artwork again.

Despite similar presentations and treatment parameters, Ann and Billy’s postsurgical trajectories were remarkably different. It left us wondering whether we could somehow “peek” into the future and predict that Ann would face the return of tremors while Bill would remain tremor-free. The conventional risk factors for poor outcomes such as advanced age and long-standing tremors did not favor one or the other. 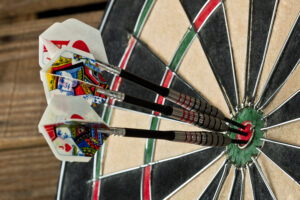 As we analyzed postsurgical MRIs with RDI, we noticed that patients did better if most of the target tissue was ablated (i.e., higher target coverage). To understand this concept, consider an analogy from the game of darts. It is necessary, but not enough, to precisely hit the bull’s eye. Instead, one must fill the bull’s eye with multiple darts. If any part of the bull’s eye is left exposed, the job is unfinished.

This finding had direct implications for the surgical technique of focused ultrasound. However, the existing technology was not precise enough to determine whether most of the target tissue was ablated. Therefore, we needed to develop better ways to determine target coverage during the focused ultrasound surgery. Moreover, this research needed to be done as soon as possible to prevent another patient like Ann from being disabled by the return of relentless hand tremor.

Please stay tuned for the next post of our “Disappearing Ablation” series.