Megan Phillips shares her life-changing story of treatment and recovery from acute promyelocytic leukemia and a hemorrhagic stroke. 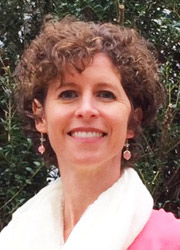 Megan Phillips was living a full life with her husband, Scott, and their two children when their world was suddenly turned upside down. After a family vacation at Lake Hickory, Megan noticed some inexplicable bruising on her arms and legs. Then, later in the week when she returned to her job as a radiation therapist, she began to experience extreme fatigue and headaches.

That weekend Megan showed her bruises to her sister-in-law, Tara. Tara noticed that Megan’s face was swollen and that her bruises had changed over the course of lunch. She urged Megan to go to a convenient care facility that same afternoon instead of waiting for an appointment with her primary care physician later the following week.

The physician assistant from the convenient care clinic called Megan with the results of the blood test at 1:15am the next morning and told her to go to the local hospital as soon as possible—Megan had acute promyelocytic leukemia and needed immediate treatment. She was shocked and upset by the news, but within a few hours told herself, “OK, I’ve had enough tears, it’s time for me to get started.”

After additional testing at FirstHealth Hospital, Megan was transferred by ambulance to UNC where CT scans revealed a hemorrhagic stroke in addition to the leukemia. Her neurosurgeon, Dr. Deanna Sasaki-Adams, said that Megan’s life was at risk and that decompressive craniectomy (removing part of the skull to allow the brain to swell) was needed to save her life. Despite the risks that the surgery itself posed, Megan’s husband had to make the hard decision to proceed since Megan was unresponsive by this point. For nearly three weeks following the procedure, she was kept in a medically-induced coma and given potent chemotherapy treatments to treat the leukemia that had triggered the stroke.

When Megan awoke, she couldn’t move her right arm or right leg. She had lost most of her vocabulary and needed speech therapy along with physical and occupational therapy. “The doctors told my husband there was no guarantee in how things would turn out. There was the possibility that I might need to stay in a nursing home.” But, Megan persevered and was able to leave the hospital after six weeks instead of the eight to twelve weeks that had been anticipated. “To say we beat all odds would be an understatement,” Megan says.

Unfortunately, Megan’s ordeal was not yet over. During the next few months, she faced three more surgeries due to an infection of the bone flap, and the final prosthetic piece was put in place nine months after her initial diagnosis. During this time, Megan regained most of her speech and physical mobility through continued therapy. She was able to return to work part-time one year to the date after her initial diagnosis, a few months after her last surgery.

Megan and her husband Scott are very grateful to all of the UNC physicians and nurses who had a hand in saving her life. The neurosurgical team lead by Dr. Sasaki-Adams included two primary residents, Dr. Michael Cools and Dr. Weston Northam, and nurse practitioner Lindsay Thorp. Megan says, “The interactions with the family were positive, comforting, but realistic. Anytime we had questions, they were open to discuss and explain the situation and what we would have to deal with. They always spoke to us in an understanding way.”

Megan felt a personal connection with the team after the long-term care they provided. She says, “During my last surgery, Dr. Cools took the time to come see me even though he wasn’t scheduled to be on the floor. It is moments like that that allow you to appreciate the dedicated work that our surgeons had for us.”

Megan’s resilience is an inspiration for other patients: “My faith, family and friends allow me to be strong and I know that everything happens for a reason. We all face obstacles in our lives, how we choose to deal with challenges can change the outcome. I choose to be motivated and positive in order to handle the curve that I may face throughout the journey.”

Megan advises others facing tough health situations to “be open to the support of family and friends. It makes a huge difference not to do this on your own.”