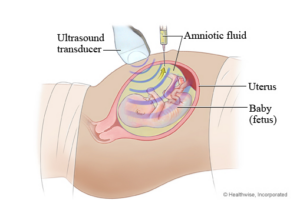 Amniocentesis is a test to look at the fluid that surrounds your baby (fetus) in the uterus. Amniotic fluid has cells and other substances that can give clues about the health of your fetus.

For this test, a needle is put gently through your belly into your uterus. About 2 Tbsp (30 mL) of fluid is taken out and looked at.

This test may be done between weeks 15 and 20 to look at the baby’s genes. It can also be used later in pregnancy.

Amniocentesis is often done around week 16 to see if a fetus has certain genetic conditions. It can also tell the sex of a fetus and help find certain neural tube defects.

Amniotic fluid has cells that have been shed by your growing fetus. The cells are checked for the number and size of chromosomes. This can show if there are any problems that put the baby at risk for certain conditions, such as Down syndrome. But this test can’t find many common birth defects, such as cleft lip, cleft palate, or heart problems.

Testing is most often done as soon as possible so women and their families have time to think about their options.

This test may also be done later in pregnancy if your doctor thinks you may have an infection of the amniotic fluid (chorioamnionitis).

Chorionic Villus Sampling (CVS) is a test that can find certain problems with your fetus. These include many diseases that run in families (genetic conditions) and chromosome problems. It is done during early pregnancy, most often between the 10th and 13th weeks.

CVS can find many genetic conditions, such as Tay-Sachs disease and hemophilia. It can also find chromosome problems, such as Down syndrome. CVS can’t find neural tube defects.

CVS is done earlier in pregnancy than amniocentesis (usually done at 15 to 20 weeks). And the results of CVS are available sooner. This gives you more time to make decisions about your pregnancy or plan for the future.

Watch A Video On CVS

In cases where there is a suspected fetal abnormality or significant fetal anemia defined as either low blood count or low platelet count, it may be recommended to obtain a sample of the baby’s blood while it is still in the womb.

The procedure is similar to an amniocentesis. For fetal blood sampling, the mother’s abdomen is cleansed and then ultrasound is used to identify the fetal umbilical cord. Under continuous ultrasound direction, a thin needle is introduced through the mother’s abdomen into the umbilical vein. A small, usually less than 1 milliliter, of blood from the baby is then obtained and can be used to determine if the baby does have a low blood count as well as for testing for genetic conditions or infection. The needle is then removed and the baby is then monitored after the procedure.

When significant fetal anemia (low red blood cell count) is suspected and identified, a fetal in utero transfusion is then performed. while the needle is in place, blood that has been carefully selected for specific use in the baby is then transfused into the umbilical vein. The baby is continuously monitored with ultrasound during the procedure. When the need for fetal transfusion is suspected, local anesthesia or a spinal or epidural anesthesia maybe used. The transfusion is continued until the fetal anemia is corrected, and periodic testing the fetal blood count is done at the bedside during the procedure to ensure the correct amount of transfusion. In rare cases, transfusion of platelets may be required as well as red blood cells. Depending on the reason for the transfusion, several transfusions may be required over the course of the pregnancy.

Open maternal fetal surgery is performed in rare conditions where operating on the baby while still in the womb can improve the outcome for the baby. The most common reasons to perform open maternal fetal surgery is to repair fetal spina bifida or in rare to cases to remove life-threatening fetal tumor such as lung or chest masses or sacral tumors that are causing heart failure in the baby at a gestational age where delivery is not possible. Open maternal fetal surgery involves making an incision in the mother’s abdomen, then the uterus (womb), and exposing the baby. The baby is not delivered but remains in the uterus and receives oxygen and blood across the placenta. Once the procedure is completed the uterus is closed and the baby is allowed to continue to develop in the womb. This procedure requires a highly skilled and collaborative team of high risk obstetric providers (Maternal Fetal Medicine), pediatric surgeons, and obstetric trained anesthesia providers among others.

During the procedure, which may last 2 hours, the mother undergoes general anesthesia and a skin incision similar to a cesarean delivery is performed. A hemostatic incision is made in the uterus while medications are given to maintain uterine relaxation, with care being taken to not disturb the placenta. Oxygen and anesthesia continue to pass to the fetus via the placenta and umbilical cord. The MFM physician performs the uterine incision and fetal positioning and monitors the fetal heart with ultrasound during the procedure. In the case of a fetal spina bifida the fetus is then positioned to expose the spina bifida at the uterine incision and the neurosurgeon closes the defect.

Amniotic fluid is then replaced, and the uterine incision is closed. The mother is usually in the hospital for 3-6 days following the surgery and receives medication to reduce the risk of preterm  labor.  After discharge from the hospital, reduced maternal physical activity and weekly follow up is planned. Delivery is then performed by cesarean delivery at 37 weeks, ideally prior to the onset of labor.

TIPS FOR YOUR FETAL SURGERY HOSPITAL STAY AT UNC

Fetoscopy involves placing a thin lighted camera into the womb to examine the baby and provide treatment as needed. The fetoscopy procedure for twin-twin transfusion is a procedure called selective laser photocoagulation (S-LPC), which separates the circulation between the two babies.  The goal of the procedure is to use laser energy to block or seal off only the communicating vessels connecting the two babies so that they no longer share blood.  This is done using a device called a fetoscope, which is a medical telescope, inserted through the mother’s belly and amniotic sac.  There are other blood vessels in the placenta that do not allow sharing of blood between the twins and the doctor works to avoid touching them.  Only the vessels connecting the two babies are touched because the others bring nourishment to areas of the placenta that belong to each baby.

Normally the procedure is performed under sedation and local anesthesia but in some cases epidural anesthesia (medicine given through the spinal column in which patient is still awake) or general anesthesia (medicine delivered through an IV and breathing equipment which makes the patient very sedated or unconscious) may be necessary.  There are cases in which the babies may still be able to move even with local or epidural anesthesia.  In those cases, a muscle-blocking drug is injected into the thigh of the recipient twin with a very thin needle.  This keeps the baby from moving in order to perform the surgery.

After anesthesia is provided, a small incision is made on your abdomen and a trocar (narrow metal tube) is inserted into the amniotic sac of the recipient twin.  The fetoscope inside a protective operating tube is passed through the trocar to observe the blood vessels on the surface of the placenta.  An examination will identify the blood vessels that link the circulations between the twins.  Only those blood vessels will be sealed off (photocoagulated) using laser energy.  The laser will emit short pulses of energy lasting about 3 to 4 seconds for each blood vessel.  The laser will be used repeatedly to seal off all of the identified blood vessels.  Excess amniotic fluid may be removed from the recipient twin at the end of surgery.  Antibiotics will be provided before and after surgery to prevent infection.

WE APOLOGIZE, THIS CONTENT IS UNDER CONSTRUCTION:
During a Fetal Shunt Placement, a shunt or hollow tube is inserted through the mother’s abdomen and uterus into the amniotic cavity to drain fluids from a fluid-filled fetal space such as urinary tracts or other fetal spaces which compresses and damages organs, including the heart, lungs or kidneys.

Vesicoamniotic shunting is the most common type of fetal shunt placement for blocked urinary tracts, such as bladder outlet obstruction. When a fetal urinary tract is blocked, the bladder becomes enlarged and the amount of amniotic fluid decreases (oligohydramnios).
This may cause:
• underdeveloped lungs (pulmonary hypoplasia)
• deformities of the face and extremities (Potter sequence)
• kidney damage

A vesicoamniotic shunt creates an alternate pathway for urine to bypass the obstruction, allows the urine to drain into the amniotic cavity and restore normal fluid levels.

Diagnostic tools to evaluate the necessity of a fetal shunt placement may include: ultrasound, fetal MRI, fetal echocardiogram, serial renal function profile and chromosomal analysis. It is ideal to perform the procedure prior to the fetal lungs and kidney are fully developed.

In selected cases where the transition from life in the womb to birth could be dangerous to the baby, a unique form of delivery may be indicated. The ex-utero intrapartum or EXIT procedure is designed to allow surgical intervention for the baby to be performed while the baby is obtaining oxygen and blood supply from the mother immediately before birth. The EXIT procedure maybe recommended in situations such as a baby that is complicated with either a very small chin called micrognathia or a large mass or tumor on the baby’s neck or face, either of which could make breathing difficult at delivery. Additionally, some large tumors in the baby’s chest could cause significant complications with heart function or breathing at delivery, and it may be recommended to be removed via an exit procedure at the time of delivery.

An exit procedure is both similar and different from a typical cesarean delivery. In an exit procedure, the uterus or womb is kept relaxed with normal blood flow and oxygen flow to the baby during the entire procedure. To achieve this continued blood flow to the uterus and to keep the uterus relaxed, general anesthesia in which the mother is not awake during the procedure is required. After the anesthesia is obtained, a cesarean type incision is made in the mother’s lower abdomen and the uterus is opened with special techniques and instruments to prevent bleeding. The baby is partially delivered but is not removed entirely from the uterus and the umbilical cord is not clamp and cut.

In the case of a suspected obstruction to the babies breathing, a tube is placed into the baby’s trachea or windpipe and proper placement confirmed before the baby is delivered. When an exit procedure is done for a large neck mass, either the tube is placed into the trachea or a surgical airway called a tracheostomy is performed. If neither of these is possible, in very rare cases the neck mass is then surgically removed, and the baby’s airway obtained. Only once the airway or the surgical procedure is confirmed, is the baby completely delivered from the uterus, and the umbilical cord is clamped and cut. In rare cases, such as a large fetal chest mass, during the EXIT after the baby is partially delivery and an IV is started, the pediatric surgeon may make an incision in the baby’s chest and remove the mass. After this is completed the chest is closed and the baby can then be safely delivered. As in a cesarean delivery, the uterus and the mother’s abdomen are then closed.