UNC OB-GYN’s Dr. Vickie Bae-Jump was the event’s keynote speaker for the second year in a row. Funds raised by She ROCKS help support her ovarian cancer research.

Dr. Vickie Bae-Jump, associate professor at the UNC Department of Obstetrics and Gynecology and member of the UNC Lineberger Comprehensive Care Center, served as the keynote speaker last week (Sept. 17) for the second-annual She ROCKS luncheon, a popular event based in Wilmington, N.C., to raise money and awareness for ovarian cancer.

Quinn reminded women in the crowd to speak up to about any symptoms that seem out of the ordinary, and to continue their support and care of one another.

“The message still continues – we need each other. I need you, you need me, you need the people around your table. We’re put on this earth to live and to make a difference, and when that time is up, the time is up. But until then, I remain steadfast, and I am grateful,” said Quinn. “I am confident that together in our lifetime we will certainly find a cure, an early detection, for all cancers, not just ovarian.”

As part of her presentation, Dr. Bae-Jump outlined the most common ovarian cancer risk factors: 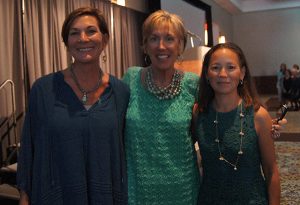 Dr. Bae-Jump shared the progress made in ovarian cancer research over the years through increasingly effective therapeutic drugs and treatments and acknowledged there are still many challenges left to address.

“In the United States, 21,000 women are diagnosed with ovarian cancer, and 14,000 will die of the disease each year,” she said. “Unfortunately, 75 percent of women with ovarian cancer present with advanced-stage disease, which means the disease has spread from the ovary to other places. Only 30-to-50 percent of these wonderful women are still with us five years later.” “Why do we care if we diagnose ovarian cancer early? Because, women will do so much better,” she said. “The five-year survival rate for early-stage ovarian cancer, or cancer than is confined to the ovary, is 93 percent – so much better than 30-to-50 percent for advanced-stage disease.”

Ovarian cancer is often diagnosed late because there are no available techniques suitable for the early detection of the disease and many of the symptoms – like abdominal pain or swelling and urinary problems – are vague and easy to dismiss by both patients and their doctors.

How to prevent ovarian cancer, detect it earlier and better treat it are all focuses of Dr. Bae-Jump’s research with UNC Lineberger. She thanked Beth Quinn and She ROCKS, which has helped to sponsor those projects.

“My lab is very interested in investigating the relationship between diet and ovarian cancer development and progression. We do this by taking mouse models of ovarian cancer and giving them different diets, especially a high-fat diet to induce obesity. We’ve looked at obesity exposure across the lifespan – in-utero versus adolescent versus adult exposure to obesity – and one of the really common themes is that the longer the exposure to obesity, the increased aggressiveness of the cancer.”

Ovarian tumors from obese and lean women, as well as mice with ovarian cancer, have been found to be metabolically and genomically different, meaning the two different patient populations may have different targets for treatment and prevention.

In collaboration with Dr. Stephen Soper in UNC’s Department of Chemistry, Dr. Bae-Jump’s lab is exploring how different subpopulations of circulating tumor cells, targeting the epithelial and fibroblast components of a tumor, may be used in the early detection of ovarian cancer and potentially lead to more targeted treatments. A current genomic study is looking at how these subpopulations of circulating tumor cells are the same or different to improve response rates to current treatment.

Dr. Bae-Jump’s research on metabolism and ovarian cancer focuses also on continued studies of drug therapy, which now includes studies of metformin, a common anti-diabetic drug that is thought to have potential in treating or preventing cancer because of its effect on insulin, glucose and related signaling pathways.

“We’ve taken metformin and looked at it in ovarian cancer cells and ovarian cancer mouse models. This is always the first step in trying to figure out if a drug would be helpful in the treatment of cancer, and we’ve definitely found that metformin inhibits cell proliferation and inhibits tumor growth,” said Bae-Jump. “Metformin has improved efficacy in treating ovarian cancers in obese versus lean mice, which we think is linked to its anti-diabetic affect.”

“If you are experiencing any of these, talk to your doctor and even suggest a pelvic ultrasound,” she said. “I agree with Beth – we as women should be very proactive in our healthcare.”