Suboptimal breastfeeding is associated with a greater burden of disease among black and Hispanic populations, according to a study co-authored by Dr. Alison Stuebe.

November 22 – A new study published in the Journal of Pediatrics showed that black infants had more than twice the deaths of whites attributable to lack of optimal breastfeeding. Black infants also had more than three times the rate of necrotizing enterocolitis, a devastating disease of preterm infants, attributable to suboptimal rates of feeding with their mother’s own milk.

It is recommended that women breastfeed each child exclusively for the first six months of life, followed by continued breastfeeding while complementary foods are introduced for at least the first year of life. The authors defined this practice as “optimal breastfeeding.” 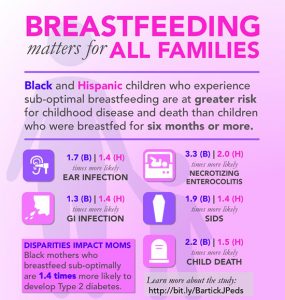 “If mom can’t go to work, she’s not getting paid. This may spell the difference between making rent that month, or keeping the lights on, or paying for basic needs,” said Dr. Melissa Bartick, assistant professor of medicine at Cambridge Health Alliance and Harvard Medical School, and lead author of the study. “When I first saw our results, I cried.”

Dr. Alison Stuebe, distinguished scholar of infant and young child feeding at the Carolina Global Breastfeeding Institute and associate professor of obstetrics and gynecology at the University of North Carolina at Chapel Hill and Dr. Eleanor Bimla Schwarz, professor of medicine at UC Davis Health System, are co-authors of the study.

“These disparities rates reflect barriers to breastfeeding, such as lack of paid leave and outdated maternity care, that disproportionately impact families of color,” said Dr. Stuebe. “We can reduce health disparities by protecting each woman’s right to breastfeed her children.”

Two common diseases of infancy merit particular concern for black and Hispanic infants: ear infections and gastrointestinal infections. Compared with white infants, ear infections due to suboptimal breastfeeding were 1.7 times more common in black infants and 1.4 times as common in Hispanics; gastrointestinal infections due to suboptimal breastfeeding were about 1.3-to-1.4 times as common among both black and Hispanic infants.

Ear infections and gastrointestinal infections can translate into significant economic insecurity for parents who must miss work to care for sick children. Department of Labor statistics show that black and Hispanic mothers are more likely to be heads of households and to have low-wage jobs that lack paid sick leave.

The study was funded by the WK Kellogg Foundation. It used computer modeling to simulate hypothetical cohorts of black, white and Hispanic women and the children they bore, based on current literature linking disease risk and breastfeeding.