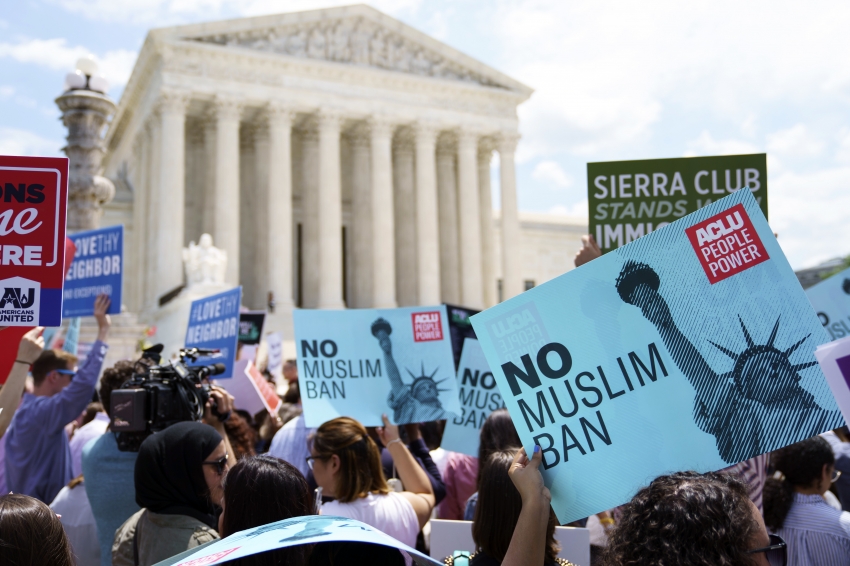 When President Trump, days after taking office, issued an executive order barring travelers, including students, from a half-dozen predominantly Muslim countries, it was like a chain-link fence hastily erected along the border. High and barbed and menacing, yes, but thanks to immediate legal challenges, it had an aura of impermanence, as if it could be torn down as abruptly as it was raised.

With the U.S. Supreme Court’s 5-to-4 decision on Tuesday upholding the travel ban, that fence is now a wall, hulking and durable. In siding with the Trump administration, the court, in a decision written by Chief Justice John G. Roberts, ruled that the order fell within executive authority over immigration and national security, despite the president’s sometimes incendiary and bigoted rhetoric about Muslims and foreigners.The wall, however, wasn’t built overnight. For the past 17 months, bricks have been laid, one by one. An executive order mandating “extreme vetting” of travelers — one brick.

Scrutiny of visitors’ social-media accounts — another. A crackdown on students who overstay their visas. New restrictions on the ability of recent graduates to remain in the United States and work. Increased oversight of the H1-B program, for highly skilled foreign workers. Limits on visas for Chinese students and scientists in certain sensitive, high-tech fields. Brick, brick, brick.

The travel ban — and more recently, the separation of migrant children from their parents at the U.S.-Mexico border — horrified and galvanized many Americans. But for international students — those already studying in the United States and those thinking of coming here — those little-noticed rules changes and regulatory revisions have continuously ratcheted up anxieties first sowed by the travel ban.

The justices’ decision affirming the ban could cement the perception that America, Trump’s America, is no longer welcoming to outsiders. It could be the final brick in the wall.

“Today, the United States can be seen as a country that bans people from our shores, not on the basis of what they have done, but for where they are from,” Jill Welch, deputy executive director for public policy at Nafsa: Association of International Educators, said in a written statement, one of dozens issued by higher-education organizations and institutions.

Though unwelcome by educators, the court’s decision was not entirely unexpected. During oral arguments two months ago in the case, known formally as Trump v. Hawaii, No. 17-965, several justices seemed hesitant to second-guess a president’s national-security judgments.

Indeed, in his decision, Roberts suggested that the president’s rhetoric, however inflammatory, did not undermine his authority to set policy. “The court must consider not only the statements of a particular president,” he wrote, “but also the authority of the presidency itself.”

Both Sotomayor and Justice Stephen G. Breyer, in a separate dissent, noted the potential harm the travel ban could do to colleges and to students and scholars.

A ban’s deleterious impact on higher education has long been key to arguments against the travel restrictions. In an initial ruling blocking the order, a federal judge in Washington State cited the effects on the state’s public colleges and universities

The most recent iteration of the travel ban — the third issued by the administration in the face of legal challenges and the one reviewed by the Supreme Court — carved out a special exemption for Iranian students, the largest group affected. It said they could be granted visas, although they would be subject to tough screening. (In his dissent, Breyer noted that the U.S. government is on track to approve just a quarter of the number of visas to supposedly exempted students that were granted last year.)

The initial executive order banning visitors from a half-dozen predominantly Muslim countries was issued with little warning in January 2017, less than a week into Trump’s tenure. Its rollout was so sudden that some travelers were caught en route, having boarded flights with legal visas only to be turned away by customs officials when they landed. Thousands from the affected countries, including students and scholars, were stranded overseas. The rollout was so hasty that at times there was confusion over how to enforce the ban, including contradictory guidance about whether green-card holders were covered.

On campuses across the United States, students and faculty members protested, while college leaders condemned the ban and sought to reassure international students that they would be able to continue their studies. Immigration advocates quickly challenged the executive order in court, citing the president’s own anti-foreigner, anti-Muslim rhetoric.

A second, modestly reworked order was also successfully challenged, and last September the administration unveiled a new set of travel prohibitions. This third and final order applied to citizens of eight countries — including a couple, North Korea and Venezuela, without large Muslim populations. Unlike the earlier blanket ban, the new restrictions varied from country to country, preventing all travel from certain countries while increasing the scrutiny of visas from others.

Concerns about the ban have reverberated far and deep. About half of all colleges reported foreign-enrollment declines last fall to the Institute of International Education. And a recent survey by Intead, an international-student marketing company, found that three-quarters of Chinese parents were less interested in having their students study in the United States because of Trump.

Kenneth Reade, director of international-student and -scholar services at the University of Massachusetts at Amherst, said UMass students from a variety of countries had put off international travel over fears they could get caught up in future travel restrictions. They have passed up vacations and family reunions, missed out on overseas research opportunities, and even skipped weddings and funerals.

The Supreme Court’s decision doesn’t change policy — the justices had permitted the ban to go into effect while they considered the case — but Reade expects it to nonetheless resound among international students. “It just brings those anxieties back to the surface,” he said. “It escalates people’s apprehensions.”

Other educators said the impact of the ban had lessened with time. William I. Brustein, vice president for global strategies and international affairs at West Virginia University, has spent the last week in China, talking with prospective students and their parents. He has been bombarded with questions about tuition costs and campus safety but has heard relatively little about the travel ban.

.“It’s already been factored into their calculations,” he said in a late-night call from Beijing. “There’s so much noise that they’ve almost become numb to what’s coming out of D.C.”

Ahmad Ezzeddine, associate vice president for educational outreach and international programs at Wayne State University, in Detroit, agreed that the main repercussions of the travel ban happened last fall, in the wake of its rollout. Or at least he hopes so. Wayne State’s international enrollments tumbled 15 percent in the fall of 2017.

Both Ezzeddine and Brustein, however, remain worried about the effect of the drip-drip of rhetorical attacks and regulatory changes on international students’ perceptions of studying in America. In India this spring, for example, word that the Trump administration had moved to restrict third-party employment of international students who do postgraduate work in the United States made headlines.

Hans de Wit, director of the Center for International Education at Boston College, said that, in a way, the court’s decision was academic. American higher education had already seen its reputation damaged, he argued, by the initial announcement of the travel ban and through the cumulative effect of subsequent regulatory and rules changes.

“The signal,” he said, “has already been sent. The damage is done.”

A Blow at Dominance

But further damage is possible, because the impact of the court’s decision is not abstract. The ban strikes a blow at one of America’s most valuable exports, the college degree. The United States enrolls more than twice as many international students as any other country, and Nafsa estimates that students from abroad contributed $36.9 billion to the American economy last year.

That makes higher education far more robust than a number of industries, like steel making, that Trump has taken steps to protect.“If we were as dominant in one type of manufacturing as we are in education,” said Leon Botstein, president of Bard College, “no one would think it made sense if we just tore it to shreds. But we’re killing our own competitive industry.”

As president of New York University, John E. Sexton led an ambitious international expansion, opening campuses in Abu Dhabi and China. “For those who talk about making America first, here’s an area where we already are first,” said Sexton, who stepped down in 2016. “It seems crazy to undermine our position, but we’re doing just that.”

Ultimately, Sexton said, it will be American students, American colleges, and America itself that will be the losers if fewer international students come to study here. American colleges rely on talented students from abroad to fill graduate programs, particularly in the sciences. Learning how to deal with an increasingly connected world is critical, and with few Americans choosing to study abroad, interacting with classmates from overseas is a key way for domestic students to gain such a skill. And students who study here often return home with a more sophisticated and nuanced understanding of the United States, a form of soft diplomacy, Sexton said.

Not everyone is ready to throw in the towel. Jessica B. Sandberg, director of international admissions at Temple University, points out that international-student numbers fell after the September 2001 terrorist attacks, only to rebound. “As a country,” she said, “we bounced back.”

Still, last fall, for the first time in more than a decade, the enrollment of new international students declined.

The president and his policies are not, of course, the only reasons the United States is losing market share. Competition is on the rise from other countries, especially Canada, and the quality of education in many of the nations that have traditionally sent large numbers of students is improving. But the court’s ratification of the travel ban could make international recruitment that much more difficult, said Patti McGill Peterson, a senior fellow at the American Council on Education.

“It’s one thing to run a race,” Peterson said, “but you don’t want to run that race with two sandbags at your ankles.”

Colleges, individually and as part of a nationwide campaign dubbed #YouAreWelcomeHere, have attempted to counter messages sent by the travel ban and other policies by emphasizing that campuses remain safe and open.

Sandberg, who has spearheaded #YouAreWelcomeHere, notes that 100 colleges signed up for a webinar last week on starting a scholarship program for international students.

Such efforts, which present higher education as a welcoming island in the midst of choppy seas, are typically led by colleges’ international or admissions offices. And they are aimed at a specific constituency, international students and their parents, half a world away. But what about closer to home?

De Wit, who is originally from the Netherlands, said he had noticed a lack of sustained, organized protest against the travel ban or other administrative policies that affect higher education, either at the institutional level or by students. That struck him, as a European, as surprising.

More recently, however, college leaders have begun to mobilize. Last November a group of college presidents formed the Presidents’ Alliance on Higher Education and Immigration, an organization meant to stimulate sustained advocacy on issues like the travel ban and protections for Dreamers, young people brought illegally to the United States as children and now fearing deportation.

Higher-education leaders are obliged to speak up in defense of their values no matter who is in the White House, said Botstein, the Bard president. The travel ban has exposed a fault line between the principles espoused by academe — internationalism, engagement, inclusion — and those embraced by the president and his supporters.

Correction (6/27/2018, 12:38 p.m.): This article originally misreported the estimated impact of international students on the American economy. The students contributed $36.9 billion, not $2.4 billion, to the economy, according to Nafsa. The article has been updated to reflect this correction.

Karin Fischer writes about international education, colleges and the economy, and other issues. She’s on Twitter @karinfischer, and her email address is karin.fischer@chronicle.com.