Although malaria deaths have been nearly halved since 2000, the global health community is hardly in a celebratory mood on this World Malaria Day. The reason: Progress against malaria has recently stalled. “We are now at a turning point, warned WHO Director-General Tedros last November at the publication of the World Malaria Report. “Without urgent action, we risk going backwards, and missing the global malaria targets for 2020 and beyond.”

One of the major reasons for the reduction in malaria deaths since 2000 has been artemisinin drugs, powerful antimalarials that filled a void after the drug resistance overcame the previous go-to malaria drug, chloroquine. However, WHO and others have been documenting worrisome signs of artemisinin resistance this decade.

The promise of new antimalarial drugs and concerns about resistance to existing ones made an excellent topic for Wednesday’s World Malaria Day symposium, Malaria Drug Development & Resistance, according to lead organizer David Sullivan, MD, with the Johns Hopkins Malaria Research Institute. More than 350 researchers from Africa, Australia, Europe and the US are descending on Baltimore for a daylong conference at the Johns Hopkins Bloomberg School of Public Health.

In the following Global Health NOW exclusive interview, Sullivan, a professor of Molecular Microbiology and Immunology, surveys the current state of malaria drugs, the pipeline of new drugs (look for a new breakout drug in the next 5 years), and a preview of the symposium. 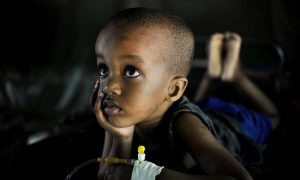 The nightmare scenario is for the malaria parasite to develop resistance to artemisinin. Some researchers have documented resistance in Southeast Asia. Do you have a timeframe of how long artemisinin will continue to be an effective drug?
I still think that we have at least 10 years left with the artemisinin class. They still are very effective at rapidly diminishing most of the stages of the parasite. What they’ve discovered in Southeast Asia, is that there’s just one stage of the [parasite’s] lifecycle that is resistant, but many of the other stages are just as sensitive. We’re dosing them with a short exposure, just hours, rather than the quinolines, and so I think it is a concern.

What do you mean by “dosing them with a short exposure?”
That the drug disappears within hours [in the human body]. We have intervals of no artemisinin drug that is in the bloodstream, for which the parasite has adapted. I think it is concerning that we have genetic selection by a drug … but we do have some tricks up our sleeves. We can add in additional drugs—have 3 drugs at once—or we can extend the duration, both which will optimize and lengthen the time that we have this vital drug. So, I still think the artemisinins will not disappear very quickly.

That’s good news. Resistance to chloroquine developed in the same general region. Are there parallels there that can predict where artemisinin resistance might head and how it might develop?
There are many parallels. Both in the same region, where there’s low immunity to the parasite, [and] there’s more reliance on drugs to eliminate the parasites in an individual, with the vectors that are able to sustain drug resistant parasites that sometimes are not as viable in the mosquito stage as the drug sensitive ones. We still think that the spread, mainly by people migrating, carrying drug-resistant parasites, will probably track the same way. But again, I think we still have [options for] combining extra drugs for combination therapy, make it triple therapy, and extending the duration. That should set up some firewalls to prevent artemisinin [from] being not effective at all.

And on the drug development side, how do things look there? What do you see as most promising in the pipeline?
At present, we have reshuffling of our present quinoline drugs and our artemisinins in combinations, which will prevent resistance. One of our speakers, Dr. Meg Phillips [chair of the Department of Biochemistry at UT Southwestern], is going to talk about a novel drug target that … works against most of the stages of the malaria parasite that’s called a DHOD [dihydroorotate dehydrogenase] inhibitor. That’s one of the most promising in the pipeline, but we also have other inhibitors that are promising, but they might have some side effects … that might hold them up. There’s other inhibitors—sodium pump inhibitors or kinase inhibitors— and other pathways that will be discussed at the meeting.

So, you’re talking first about making different combinations with artemisinin and the quinolines to buy some time, and then for new drugs you’re talking about possibly DHOD and—
Right.

And those entirely new drugs necessarily are years and years in development?
Probably about 4 or 5 years before they hit. Our keynote speaker, or our first speaker, is Tim Wells from Medicines for Malaria Ventures sponsored by many governments and also by Gates, whose sole purpose is to gather academia and industry to push new malaria drugs. He’s going to start off the meeting, giving us a lay of the land on drug development and maybe also answer that question, How soon will we have the new drug in the clinic?

I think that we’re probably less than 5 years away with a totally new class of drug being in the clinics.

You sound pretty optimistic.
Many people have accused me of being an optimist, and I do work on drugs, which does make me optimistic. I’m not pessimistic about the phenomenon of ring stage artemisinin resistance, and I think that we do have some tricks and tools up our sleeves.

We do have some needs, where you still need drugs for mass drug administration safe for women of childbearing age to take the drugs. We do need to go after a sleeping dormant stage in vivax malaria and a certain type of malaria, so we do have our gaps. But I think that there is optimism in the air more so than pessimism of drug resistance.

Has that perception changed since you’ve been working on malaria over the last couple decades or so?
When I first started out, there was sort of this spectra of chloroquine failing, deaths were continuing to go up, and the artemisinins were available, but they were not widely employed, especially in Africa. And I think since around 2000, the artemisinins have really been deployed in Africa and as a result, we’ve more than halved our total number of deaths. So, both the deployment of rapid diagnostic tests and effective artemisinin drugs in combination therapy have really helped us to prevent deaths, although the total number of malaria cases is still about the same. We’re still sort of waiting on vaccine or safe mass drug administration strategies so that we can decrease the total number of cases that we have. We have made a great impact on using drugs on deaths.

So, any favorites, any talks at the symposium that you’re especially excited about?
I’m excited about them all, and I think that we have a great program. There’s a little bit of history of malaria drug development and about how far that we have to go. We have a couple of stories on a couple of novel, promising targets that are sort of past the bench in preclinical studies and still doing well. And then we also have a neat presentation on this drug ivermectin that kills mosquitoes, and so someone has sort of developed a capsule that unfolds in the stomach and is retained there, and makes for a slow release over a couple of days. And we’re also talking about truly how pharmacokinetics is really tied into killing action on the parasites. And then in the afternoon, maybe we will get a little bit into some controversial topics on drug resistance. I think there’s a little bit for everyone in regards to development of malaria drugs.

What’s your overall message to people about malaria?
The status on drug development is optimistic. I think that we have a shorter time on the horizon for deployment of new drugs. 10 or 15 years ago we didn’t have many new drugs in the pipeline. We still have effective drugs.

However, we still have our work cut out for us in trying to go after the dormant vivax stage and tailoring a drug so that it’s perfectly safe for mass drug administration. We don’t yet have a drug like chloroquine, which was really safe and effective even for mass drug administration. That would be an ideal drug. Our ideal drug is a single drug, all stages, able to be dosed in a single encounter, although I think we’re sort of realizing that we can’t have it all, and that in the end we may need a multiple dose administration maybe with 1 or 2 drugs to really help us push down the total numbers of malaria cases and eliminate malaria deaths.

Join the tens of thousands of subscribers in more than 100 countries who rely on Global Health NOW summaries and exclusive articles for the latest public health news. Sign up for our free weekday enewsletter, and please share the link with friends and colleagues: http://www.globalhealthnow.org/subscribe.html