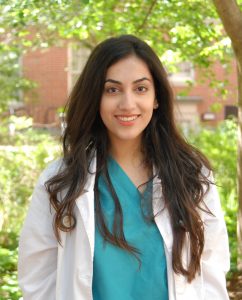 What stood out to you about this elective?

The reason why I applied here was because honestly I didn’t get much clinical experience before. I know for most their final year is the clinical year, but I was doing another rotation last year in Cardiology, and now I’m doing critical care and I’d never been in an ICU environment.

I didn’t even know that pre-rounding was a thing, so coming here and waking up at 5am, and reaching here at 6:15/6:30 was unexpected and I don’t know how I did it. I got about 5 hours of sleep every night. But, just being here, and pre-rounding, looking at all of their charts and at what happened overnight- you’re looking at minute-to-minute changes in their values and you have to manage them according to everything. You have to take into consideration everything, even outside of cardiology.

It was interesting because it was so fast-paced. In the morning, we had morning rounds and I’d never done that! So, as a medical student being exposed to that was fun because I got to see and take care of so many patients on my own. For example, I followed one guy who had depression and congestive heart failure, and he was a perfect candidate for an LVAD, and he chose not to because he had depression and we had to respect his wishes. Then there was another patient who I was following since I’ve been here. He was an illegal immigrant, and he was a candidate for transplant—he’s really young—and he’s dying now. He wanted to fight, he wanted CPR, we kept calling him a fighter, but ultimately they had to send him home because he wasn’t a candidate due to his illegal status. The last day, when they were talking to his family, and they were counseling them- I really learned from that. I learned how to address such personal and emotional issues. His whole family was there, his mom didn’t even speak English, but the doctor and the resident that were there really addressed it in a way that they understood what was going on.

I was really nervous when I came in, and I didn’t want to present, but now I’m a lot more confident in myself. I think now I can present a case with the proper format and include all of the important things. You have to keep in mind the values, and the changes, and the reasons for those changes, and I feel like I can do that now.

Do you have any advice for other students?

It’s important to do an intensive care elective. Not just plain medicine, not just shadowing or observerships. It gives you a broader perspective about medicine. It’s not just sitting in someone’s office, it’s also about the numerical stuff and I learned that notes are really important over here. Half of the time they’re taking care of patients, but the majority of the time they’re taking notes! It can be more of a desk job and that was a surprise. I thought in intensive care everyone would be running around, and that can be true too, but that was pretty different from Pakistan because in Pakistan notes aren’t really a thing.

Finally- North Carolina! I love it! I was born in South Carolina and I loved it when I landed here from New York- the weather is so much better, everything was very green and wasn’t too hot or too cold. The house I stayed at, The Center for Human Sciences, was very homey and it’s a 7-minute walk so it anyone wants to stay there, I recommend it.