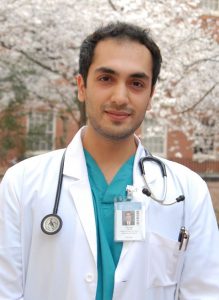 What made you choose this elective?This is my first Medicine elective, because I’ve done a Surgery rotation at Baylor in Texas and that was Cardiovascular surgery. That’s one of the reasons that I chose this elective, because I’ve always loved the heart and cardiology and anything heart-related. Initially I was more surgery-oriented which is why I did that previous rotation, so now it’s like I’ve seen the surgical aspect of hearts and how you repair them, etc. Then I wanted to get the medical aspect version of it, where you treat patients with heart disease before they get to a stage where they require surgery, which I got to do in this rotation. This is sort of in the middle because we have some really severe patients where you try to throw everything at them from a medical aspect but still they are not that stable and then you need surgical intervention. Or, you have patients who are just fine. What I love about this elective is how in-depth and thorough it is, and it’s pretty intense. The hours are crazy and everything, but you see everything.

How would you describe the elective?

This rotation is definitely very hands-on. There have been times where they offer to let me put in central lines- and I’d done them before in Pakistan and one in New Jersey, but of course I want to be cautious. If anyone is interested in doing those kinds of things, those options are always there. It’s really hands on, really in-depth, really thorough, and you obviously learn a lot.

When I met the attendings, I told them that I’m not just saying this because you’re going to write me a letter or because I’m rotating here, I honestly genuinely mean that this has been THE best learning experience- the most intense- but also the best learning experience so far. One thing I’ve noted is that there’s a huge difference between the US and International Medical Schools. I can’t speak for anyone else, but I can speak for my college. We think that we have a lot of clinical exposure, which is true, but the way that rounds are structured here and the way that you present patients, it’s more specific. Like in Pakistan they are very strict and they tell you that you need to present this way because our fathers and grandfathers did, and they’re very disciplined and very rigid on that, while over here, they don’t really care how you do it. They do have a set way which is more intuitive, and I feel like you get better patient outcomes this way, so that’s something that I definitely would give as feedback in Pakistan one day If I’m ever in a position to do so.

We’ve had patients who literally, everyone said they wouldn’t make it. They had 5-7% chance that they would, and they went from being resuscitated out in the field, 2-3 times downstairs, to literally walking out two weeks later from the floor, which is amazing right? So, it’s really interesting stuff and definitely this elective showed me that I do want to do cardiology. In the beginning I was a little torn between this and Surgery, but this has definitely confirmed that this is something I really do see myself doing. It’s not something I would ever get tired of.

I feel like I’ve literally taken out everything I could from this elective. There really isn’t much that’s missing. I talked to Dr. Katz and I know that technically I’m in Cardiology and not in Cardiovascular Surgery, but I asked if he could arrange for me to observe in one of these LVAD procedures and he said “Of course!” and he got that done for me the same day and I was able to observe the next day in the OR. So I feel like if you feel that you’re missing something, or if you’re really not sure where you are within this elective, at least for MEDI 406, they’ll do anything and everything that they can. Like if you’re really interested in seeing some liver stuff, and they have a patient that has something liver-related, I’m sure you could talk to the attending and see if they’d let you do something there. They’re not really rigid about it. Nobody is saying “You’re not allowed over here,” everyone was really sweet and I loved that they took the time to teach and they’re flexible.

What is some advice you’d like to give to other students?

There was one thing I was kind of apprehensive about, initially when we started this elective. They said you’d have attendings that switch every week, and I was like “In a week they’re not going to get to know me” but I think it was really good actually and it worked out well, because I have had four attendings so far, one thing that you get from four different attendings is that you get four different ways of how they tackle patients and ways that they think. Dr. Rossi is very evidence based, and very clinical in that way. Dr. Cavender is all research based. If you ask him any question, even a little tiny question, he’ll tell you there are all these studies from all of these articles, etc. You really get different perspectives of all these different physicians and obviously they have years and years and decades of experience, so it’s like instead of doing 4 different electives, I’m getting all of that experience from one. So it’s been a really good experience having all of these different attendings, and the residents have all been amazing. It’s nice that we have residents for 2 weeks each, that way you have someone to anchor you and help you through the whole thing.So, don’t freak out about the attendings changing- relax.

I would recommend doing research on your attendings to see what their interests are and what their research is in. Make sure your basics are strong, like your really basic basics. Like how to read EKGs and basic management stuff.—and have fun! Make friends. I feel like our block has been pretty tight, like we’re always talking to each other on Whatsapp and it’s definitely crazy, but it’s fun. I’m pretty sure we’ll be checking on each other for a long time, in fact one of the other students is going to stay at my Aunt’s house in Denver, so it’s really good. You should help each other out, it’s not like you’re competing with each other. Everything’s not so cut-throat.

Finally- with presenting I feel like I was a little too overconfident. I’ve presented cases in Pakistan, we do that all the time, and I thought that it was a pretty basic case. Then when it came to me to present, it was in t he morning rounds, and it was like my way of presenting, and what we learn in Pakistan is different. It’s similar to what they present on the ground, but not in the CICU. Everyone was sort of looking at me, and the physician was really nice and still said it was good, but I could tell it wasn’t as good as it could have been. When I look at myself now, I feel like I’ve become fluid. I’ve become part of the team. I really do feel like I have integrated pretty decently into the CICU team. So I would recommend to maybe practice presenting with the team in the mornings, that would be helpful.