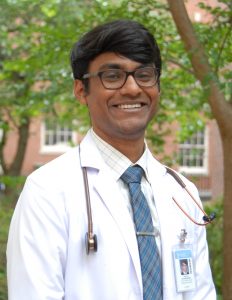 What stood out to you about your electives?

When I was training in India, and then I came into Neurology at UNC- one stark difference I saw was in how well integrated the care was in the US. This was one thing that really struck me.

The best example of this was how a patient with a stroke was treated. He came in one night, after he had a symptom of weakness in his right arm and an inability to speak. I saw art in front of my own eyes when– the hospital was told about the patient, the neurologists readied themselves, the ER prepared themselves, the patient was brought in, patient consent was gotten, the neurologists evaluated the patient, the patient was shifted to the IR, the IR team evaluated him, and the patient’s clot was removed –all within a span of 15 minutes! That was literally art in front my own eyes. I was like “How well do people have to work together for this to happen SO seamlessly?”, and that was so cool to me. And this is why I came to the US, to train in the US. Because I could see the potential of human endeavor and human intellect at all once. It was so beautiful to see everything working so seamlessly and so well together and to come out with the patient walking out, and saying “Hey I can feel my leg now.” It was so cool! The patient could move his right leg now because this was done in 15 minutes. And this something that I hope, in the future, goes to the rest of the world. That was case in point as to one of the major reasons why I wanted to come and experience the US system in all of its beauty.

How does this elective fit into your career goals?

I see myself being in an academic position 15-20 years from now, and hoping to contribute back to the science in whatever way I can. I hope to give back to the science that’s given me so much, and I feel that that objective is best reached through a strong academic center like UNC. While at UNC I saw so many great things. I saw the world’s greatest researchers, I saw both the potential of basic science research as well as clinical science research. And I could see what it takes, what dedication and what sacrifices it takes to do such research to further the science. That was one thing that was really in line with my ideals and goals.

And the other thing at UNC that I saw was the team work that I mentioned before, as to how well everyone worked together, and how important it is that every member of the team contributes in their own way and how it all comes down to patient care in the end. That was kind of beautiful to work with.

Did you feel that you were able to contribute as much as you would have liked? Did you feel included in the team?

Oh yes, of course! At every point! That’s one of the best parts of my elective. Even though I was a student, even though I was an international visiting student, at every point I felt like it was always inclusive. They would ask “What do you think?- What do you think?” The only sad part is that it has to end so early. If I could do any extra month I would do it—or an extra two months!

What kind of advice would you give other students:

You can never prepare too much for an elective like this. Because everything depends on the attitude- it’s all about attitude. It’s the attitude to learn, the attitude to contribute, it’s the attitude to want always to be better than you are. One thing I would tell people is to bring that attitude forward, always keep that attitude in your mind. The second thing that helped me was having a good background of knowledge. If everything fails, my knowledge won’t- and even if I didn’t know something, I could connect it with what I do know. So, always preparing yourself as much as possible. I know sometimes there are time constraints, but if you have time, really read up on the subject you’re going to be rotating in. Look at all the clinical aspects of it, studies, literature, and common diseases. For GI for example, we saw a lot of GI Bleeds. And reading about GI bleeds before really helped me to reinforce the topic and learn more about the topic. It’s always easier to learn about something new than to jump into a well of things you don’t know on rotation.