The disease that strikes back

When Ruby Devi moved with her husband from India’s poorest state Bihar to the national capital Delhi, she thought that her ordeal with visceral leishmaniasis, known in India as kala-azar, was over. She had fallen ill with the disease, suffering from fever and weight loss, but received life-saving treatment.

So when her husband went to seek a better life in the Indian capital, she went with him.

Two years later she became pregnant. Around that time, she began to notice skin rashes and spots on her face that wouldn’t go away. When they gradually spread to cover her entire body, she went to see a doctor.

“I felt ashamed of myself and didn’t feel like going anywhere,” Ruby says. “People around laughed at me with sarcasm and sometimes hatred. I felt humiliated.”

The doctor diagnosed her with post-kala-azar dermal leishmaniasis (PKDL), a skin condition that can develop a few months or even years after someone has successfully completed treatment for kala-azar.

For Ruby, leishmaniasis struck back. 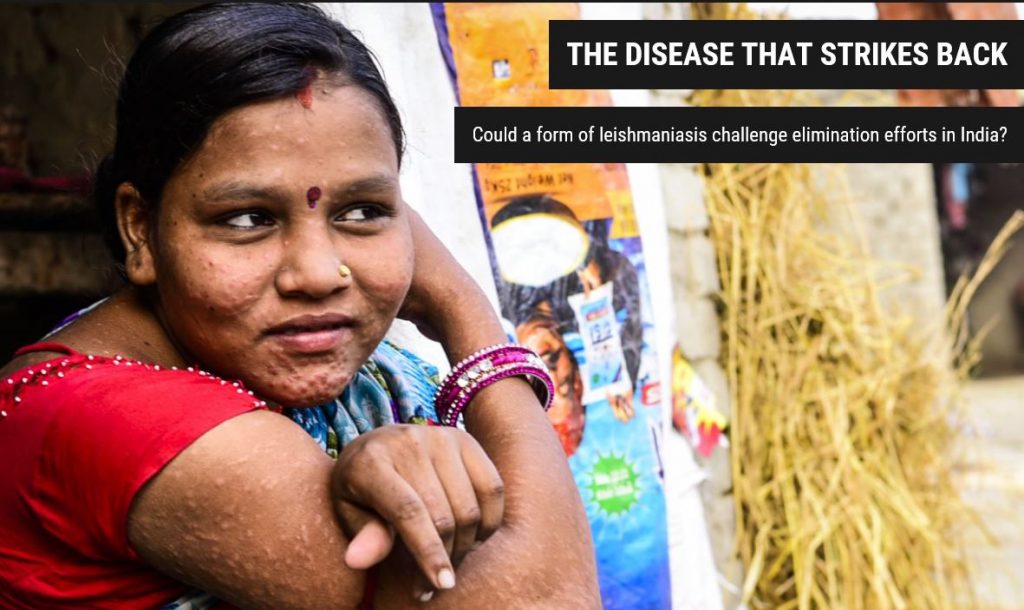 Kala-azar was first discovered in Bengal (encompassing today’s Bangladesh and parts of India, including, during the colonial era, Bihar), where it received its name, which means “black fever” in Hindi.

It causes fever, weight loss, swelling of the spleen and liver, and anaemia. Often, cases of kala-azar are mistaken as malaria. The disease is debilitating and almost always fatal when left untreated.

While kala-azar can be found on almost every continent, with over 600 million people at risk of infection and an estimated 50 000 to 90 000 new cases occurring worldwide each year. More than 90% of new cases occurred in seven countries: Brazil, Ethiopia, India, Kenya, Somalia, South Sudan and Sudan

Bihar is historically one of the areas the most affected by kala-azar in India. The endemic districts in Bihar are warm and humid and the abundance of vegetation provides sand flies the perfect environment to breed.

It is estimated that 80% of VL cases in India originate from Bihar. Out of a total 54 endemic districts in India, 33 are in Bihar.

But kala-azar hospital wards across Bihar now stand largely empty – as they do in most of South Asia. With improved treatment options included in the national treatment guidelines and greater commitment from countries and donors, efforts to get the disease under control have been working.

Nutan Kumari has worked as a staff nurse in the kala-azar ward of Vaishali District Hospital in Bihar since 2007. She has seen a sharp decline in number of cases over the last few years, especially after the government announced the new treatment regimen.

“A few years ago, there would be up to 60 patients at one time in our ward,” she says. “Now there are hardly five cases per week. We used to work in three shifts but now we work in one shift and go back home on time.”

Increased commitment from countries has made a difference. In 2005, Bangladesh, India and Nepal launched a regional kala-azar elimination initiative supported by the World Health Organization (WHO).

The aim of this partnership was to reduce cases to less than one case per 10,000 people every year at the district or sub-district level. The strategy focused on early diagnosis and treatment of the most vulnerable populations, together with stronger disease and vector surveillance and control.

Improved treatment options have been another major factor. Until recently, treatment options for kala-azar came with severe side effects and were difficult to administer. Newer, better treatments became available in the last 10-15 years, and results from an effectiveness study conducted by the Drugs for Neglected Diseases initiative (DNDi) and partners were instrumental in providing the evidence that led Indian national control programmes to recommend the use of a shorter, safer and more effective treatment option for kala-azar patients.

Could PKDL threaten the progress against leishmaniasis?

While the progress against kala-azar deserves to be widely celebrated, leishmaniasis experts are warning the health community against too much complacency: could elimination efforts be undermined by a resurgence of the disease?

To determine the transmission reservoir of the disease is key. DNDi has conducted an infectivity study in Bangladesh and is planning a similar study in Sudan to establish the infectivity of PKDL patients to sand flies. As a part of the trial, PKDL patients allow themselves to be bitten by laboratory-reared sand flies (which are free from infection), which are then analysed for the parasites that cause kala-azar.

The results of the study carried out in Bangladesh by DNDi and the International Centre for Diarrhoeal Disease Research, Bangladesh (icddr,b) are expected soon. They could confirm the hypothesis that PKDL patients can be an infection “reservoir”: this means that if they are bitten by a sand fly, the insect could then carry the Leishmania parasite, and then re-infect someone else. Since PKDL patients may develop the skin lesions years after kala-azar treatment and remain untreated for long time, transmission of the disease could therefore still happen even when kala-azar is controlled and small numbers are reported.

As such, PKDL would pose a serious threat to the success of kala-azar elimination efforts in South Asia, and would require an immediate and focused strategy from the health authorities in charge of the national programmes in India, Nepal, and Bangladesh. Early diagnosis and treatment of PKDL patients would be a critical element of any kala-azar public health and elimination strategy.

Rinki Kumari, at 14, was a lively student from the Vaishali district in Bihar, when her education was stopped brutally in its tracks by kala-azar in 2013.

She suffered from constant fever and fatigue for weeks, causing her to fail her class and miss final exams. “My classmates went on to the next class. I had to stay behind”, she says.

After recovering from kala-azar, marks appeared on Rinki’s face two years later. Her grandmother took her to hospital but even the dermatologist’s month-long treatment could not remove her facial scars.

“I stopped going out, stopped playing with my friends fearing they will tease me”, she adds. “People told me that the scars were permanent and will ruin my life as I will not get married.”

Finally a neighbour suggested she visit the Rajendra Memorial Research Institute of Medical Sciences in Bihar’s largest city Patna. There she was diagnosed with PKDL and received a treatment for three months.

The scars on her face have vanished. Thankfully the scars on her psyche too are fading away. “I don’t want to go through the trauma I underwent twice due to this disease”, she says.

The search for better treatments

The current treatments are unsatisfactory, as they are too long, even up to 12 weeks, which makes treating PKDL, a non-lethal disease, difficult for patients and health programmes alike.

DNDi aims to develop shorter and safer treatments with high efficacy for PKDL. To this end, clinical studies have started in India, Bangladesh, and Sudan to assess new treatments for PKDL.