UNC School of Medicine
Skip to main content
Institute for Global Health and Infectious Diseases
Office of Global Health Education
Home / News / The missing science: Could our addiction to plastic be poisoning us? 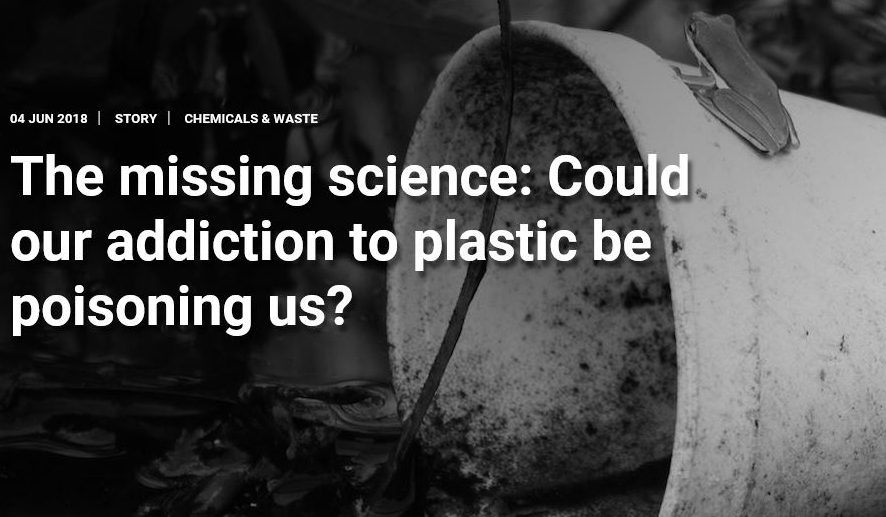 What you don’t know can’t hurt you. Of all the oft-repeated maxims, this one is perhaps the most dangerous.

Many things we didn’t know turned out to hurt us. In the 1930s, consumers were sold on the health benefits of tobacco. We happily used asbestos to flame-proof buildings. We once thought mercury was a great treatment for syphilis.

When scientists took a proper look at these substances, they found them to be incredibly harmful to people and the planet. Now this attention is increasingly turning to one of the most ubiquitous materials in use today: plastic.

The fact is that while we are acutely aware of the alarming rising tide of plastic waste, there is not a great deal known about the long-term health impacts of this pollution crisis.

What we do know is that our addiction to convenience has placed it everywhere: leaching into food from kitchens, restaurants and supermarkets; floating in microscopic particles in our drinking water; drifting in the oceans and choking wildlife and ecosystems.

For a long time, we operated on the principle that plastics are okay because there was no evidence that they are unsafe. This is not equivalent to proving they are safe. The ubiquity of plastics, and the increasing evidence that we are ingesting many of them in microplastic form, demands a closer examination of the health implications.

What we (sort of) know

Until recently, much of the research, and concern, focused on food packaging and how tiny plastic fragments “migrate” into food from the containers they are stored in.

Writing in the Journal of Epidemiology and Community Health, a team of environmental scientists raised the alarm over “food contact materials” – substances used in packaging, storage, processing, or preparation equipment. According to the research, food contact materials contain a total of over 4,000 chemical substances – including formaldehyde, classified as  carcinogen category 1B by the International Agency for Research on Cancer. There are discussions at this moment on restrictions, which can focus on the placing on the market and use of formaldehyde and formaldehyde releasers in mixtures and articles for supply to consumers.

The chemicals causing the most disquiet have been bisphenol A (BPA) and phthalates. The former is a material used in hard, transparent plastics known as polycarbonates – a popular material for baby bottles and storage containers. Phthalates are a class of chemicals that, when added to plastics, make them more durable, flexible and long-lasting.

Some research has indicated that BPA may disrupt hormone and reproductive systems, including including abnormal penis development in men. There are also suspicions that it could contribute to diabetes, heart disease and even cancer. According to the US National Institute of Environmental Health Services, exposure to BPA has long been widespread. A 2003-2004 study conducted by the Centers for Disease Control and Prevention found BPA in 93 per cent of 2,517 urine samples from people six years and older.

Some regulations have been passed to limit BPA use, particularly in baby products, and more is in the offing in the European Union, but many believe it doesn’t go far enough.

Recent research on phthalates pointed to equally widespread levels of contamination. The researchers found elevated levels of phthalates in the bodies of those who had eaten out the previous day – 35 per cent higher. These chemicals are linked to fertility problems, pregnancy complications and other health issues.

As ever in fields of emerging science, though, there is dissenting opinion. Stephen Ostroff, Deputy Commissioner for Foods and Veterinary Medicine at the US Food and Drug Administration, in February 2018 declared BPA safe for “currently authorized uses” in food packaging after a two-year study on rats.

Debate and conflicting research is, of course, part of the long process to getting to the truth. In the meantime, however, potentially harmful plastic fragments – which can also serve as magnets for other pollutants, including dioxins, metals and pesticides – are getting into our bodies in increasing quantities. And the route of migration into foodstuffs from direct contact with plastics is no longer the only one that is furrowing scientific brows. We now have to worry about microplastics.

Microplastics, pieces of plastic under 5 millimetres in length, come from many sources: larger pieces of plastic that break up; microbeads, which are added to health and beauty products like toothpastes and face scrubs; and synthetic fibres, with a single wash of acrylics capable of releasing over 700,000 particles, according to research from Plymouth University.

These tiny particles pass through water filtration systems and end up in the ocean, water bodies and our drinking water. As many as 51 trillion microplastic particles – 500 times more than stars in our galaxy – litter our seas, seriously threatening marine wildlife.

UN Environment and others have been raising red flags about microplastics for a few years now, but a study on bottled water, released in late 2017, propelled the issue into the headlines.

Orb Media commissioned Dr. Sherri Mason, a leading microplastics researcher who chairs the Department of Geology and Environmental Sciences at the State University of New York at Fredonia, to lead the study. She tested more than 250 bottles from eleven leading brands worldwide and found plastic debris – including polypropylene, nylon, and polyethylene terephthalate – in 93 per cent of the samples. The team found an average of ten plastic particles per litre of water.

Dr. Mason said now was the time to “re-evaluate our relationship” with plastics, and the World Health Organization has grown concerned enough to announce it will carry out a review of the science on microplastics – something we all know there is not enough of.

Dr. Mason also acknowledges that we know “very little” about the impacts of plastics on human health. However, the better-known impacts on wildlife a clearly a cause for concern.

“While we don’t know the exact implications of microplastic ingestion, I think we all have a pretty innate understanding that it probably isn’t good,” she said. “We have seen the impacts on aquatic species – from dehydration/starvation to the transmission of bioaccumulative toxic compounds – and we shouldn’t expect it to be any different for us.”

My own recent report on pollution also points to the strength of evidence on how plastics can damage wildlife.

Towards a Pollution-Free Planet lays out how plastic debris is present in all the world’s oceans and seas, even in remote areas such as deep trenches and uninhabited islands in the Pacific Ocean, far from human contact.

Research on the physical and toxicological effects of microplastics provides evidence of direct intake by marine invertebrates and shows how microplastics pass up planktonic food chains. Fish who ingest microplastics show physiological stress, liver cancer and endocrine dysfunction, affecting female fertility and the growth of reproductive tissue in males.

These effects are thought to be caused by the plastic itself, as well as by chemical pollutants that absorb into the plastic from seawater. Under laboratory conditions, nanosize microplastics have been shown to cross cell membranes, resulting in tissue damage.

We need to be clear that we’re not against plastics. After all, look in any hospital and see how plastics are also saving countless lives. Polymers are a key part of the clean, renewable energy revolution, and plastics can help cut colossal food waste through storage and refrigeration.

The problem isn’t plastic, it’s what we do with it.

We’ve become over reliant on single-use or disposable plastic. We buy one million plastic drinking bottles every minute and use roughly 500 billion disposable plastic bags every year. In total, some 50 per cent of plastic is single use.

Nearly one third of plastic packaging escapes collection, which means that it ends up clogging our city streets and polluting the environment. Every year, up to 13 million tonnes of plastic reach our oceans, where it smothers coral reefs and threatens vulnerable marine wildlife. The plastic that ends up in the oceans can circle the Earth four times in a single year; it can persist for up to 1,000 years before it fully disintegrates.

Action is growing. The third UN Environment Assembly, held in Nairobi in December 2017, passed a resolution to eliminate plastic pollution in the seas. The Clean Seas campaign tackles the production and consumption of single-use plastic, with over 76,000 pledges from governments, cities, companies and individuals in place.

World Environment Day 2018, meanwhile, is themed as Beat Plastic Pollution, and urges governments, industry, communities and individuals to break up with single-use plastic. Chosen by this year’s host, India, the theme invites us to consider how we can make changes in our lives to reduce the heavy burden of plastic pollution. This is the most-important step toward dealing with the problem.

World Environment Day provides an opportunity for each of us to embrace the many ways that we can combat plastic pollution around the world. The health of our planet is certainly at stake – and by consequence so is ours.