A unique environment for graduate training in pathobiology and translational science… 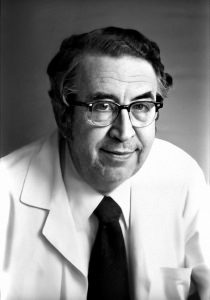 The Robert H. Wagner Scholars Program in Pathobiology and Translational Science memorializes the academic accomplishments and contributions of Dr. Robert Wagner to the University of North Carolina School of Medicine. Dr. Wagner was a member of the faculty of the UNC School of Medicine from 1950-1986, and a pioneer in hemophilia research with numerous research accomplishments, including development of methods for purifying Factor VIII from normal blood for use in the treatment of patients with a common form of hemophilia, and development of laboratory tests that continue to be used today in the diagnosis of patients with bleeding disorders. Dr. Wagner was also a dedicated teacher. He mentored the first Ph.D. student that performed research in the Department of Pathology and then served as Director of the Graduate Studies from 1964-1986. During this period of time, the pathology graduate curriculum developed into a strong graduate educational program with diverse research training opportunities for Ph.D. students.