Our laboratory focuses on the cellular biochemical mechanisms involved in coagulation. Of particular interest is the interaction between cells and proteins in the initiation and propagation of coagulation reactions. Disease states of interest include cancer-associated thrombosis, sickle cell disease, and HIV-associated cardiovascular disease.

Coagulation describes the physiologic mechanism by which a blood clot is formed as a means of arresting blood loss from a ruptured vessel. Following vessel constriction and platelet aggregation, a fibrin clot forms to effectively occlude continued blood loss and prevent further blood loss. The process of coagulation is initiated by the exposure of cell-associated proteins to blood. This exposure can result in the activation of two pathways: the extrinsic and the intrinsic pathways. It is well established that the extrinsic pathway is initiated in response to a protein called tissue factor. Tissue factor is expressed by cells that are normally found external to blood vessels, therefore, any breach of the vessel wall results in surface contact with tissue factor and the initiation of blood coagulation. In contrast, the role of the intrinsic pathway is controversial; although it may not be required for fibrin formation in a breached normal vessel wall (‘hemostasis’), it may be called upon to provide back up activation of coagulation in undesirable thrombotic effects, such as during a heart attack, stroke, or venous thrombosis. While each pathway is distinct in its intermediate steps, both result in the ultimate cleavage of prothrombin into thrombin. Thrombin then converts fibrinogen into long threads of insoluble fibrin, which effectively forms a mesh that prevents further blood cell, platelet, and plasma loss. In a short time, the web of fibrin forms an insoluble clot that is able to withstand continued blood flow. 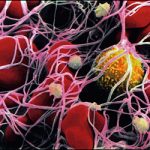 Under abnormal or diseased conditions, this cascade of events can be altered, thereby affecting both the effectiveness of the clot as well as the time it takes for the clot to form. Thorough examination of the events leading up to clot formation in both normal and diseased conditions not only broadens the understanding of coagulation, but also could provide clinically-relevant targets in treating patients suffering from thrombosis.