This article is part of a series. Read the first article of the series here.

Our quest to solve the mysterious case of “disappearing ablation”after focused ultrasound surgery led us to consult and collaborate with Dr. Mojgan Hodaie. Dr. Hodaie, Professor of Neurosurgery at the University of Toronto, has pioneered the use of diffusion MRI to detect tissue response to surgery and used that information to optimize the neurosurgical techniques.

Together with Dr. Hodaie, we investigated the existing and novel techniques to determine how much target tissue was ablated. We made two critical observations: 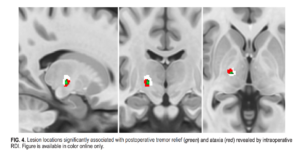 2. The tissue ablation that was critical for a durable tremor reduction was the bottom half of the VIM (remember this was the target nucleus for surgery), especially the lower VIM border as it merged into the subthalamic white matter. This finding was similar to what another group had recently published. However, what surprised us most was that any digression from this bottom half of the VIM into the subthalamic white matter increased the risk of side effects. Therefore, we concluded that VIM ablation needed to be performed within the borders of the VIM, and even a millimeter extension beyond these boundaries could be risky.

Equipped with these novel insights, we assembled a team required to undertake a deeper dive to investigate what the optimal technique for focused ultrasound ablation would look like.  The logical next step was to apply for an NIH grant to investigate and solve the next set of challenges – what are the limits of RDI in determining tissue ablation, and how does a standardized technique for tissue ablation match up against the standard approach?

As we conclude this post, we thank you for your continued engagement with this series. We will have some exciting news in our next update coming soon.

Read the full publication in the JNS.