Matthew is 10-year old who has been participating in the model classroom project since 2004.  When Matthew began the DB project, he had few methods for formal communication, which included 15-20 crudely approximated signs (recognizable to only familiar communication partners), a single message device and a frequently thrown 8-location augmentative communication device.  During many activities, Matthew had difficulty attending and required a special chair and a seat belt to prevent him from bolting.  Efforts to educate Matthew at his home school were challenging, resulting in difficult behaviors and limited literacy and communication learning.  Due to medical issues and behavior challenges, the team decided to provide Matthew’s education through a homebound school program. Our efforts began with identifying a means for writing.

Due to fine motor difficulties, writing activities consisted of hand over hand support from an adult to make marks, trace words and to write words.  Given the critical role of writing in typical emergent literacy development, our first efforts focused on identifying ways for Matthew to independently explore and generate print. In this video, Matthew used an enlarged keyboard (IntelliKeys, IntelliTools) with software that provides auditory and visual feedback (IntelliTalk II, IntelliTools).  For the very first time, using this “alternative pencil,” Matthew was able to freely experiment and “scribble” with ease and most importantly, interest.

As with most students with significant disabilities and deaf-blindness, formal and accurate assessment is challenging.  However, during this activity, a number of observations can be made about Matthew’s interests, understandings, and sensory abilities.  Given a mode of easy, independent writing his level of cognitive engagement is visible; he does need any prompts to attend or to remain in front of the computer.  He appeared to follow the visual highlighting as it moved through the letters.  He also noticed the auditory feedback of the letters being spoken and was aware of it when it stopped.  As Matthew put the paper to his face to “read” it, he showed us that he knows that print is to be read.  Mom’s expectations were high and she celebrated his writing… communicating to him that writing is valuable and that he is a writer.  After this activity, Mom immediately started a journal for Matthew and made sure he had daily opportunities to write.  From that point on, Matthew was a writer.

Early writers often begin writing by drawing pictures.   However, due to his fine motor difficulties, Matthew was unable to draw pictures. As a result, pictures were offered for him to write about.  Matthew has chosen a picture about a favorite activity, swinging.  Using the IntelliKeys, he writes a random string of letters. 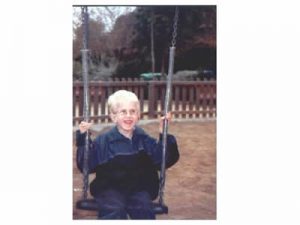 rrojjxwp ilkjthbn hlkj,,kwmkkd
While the above sample does not spell anything yet, (and should not spell anything- given his inexperience with writing), Matthew is learning about the alphabet by writing with the entire alphabet.   Similar to typically developing early writers, regular opportunities to continue this will lead to changes over time. Additionally, through this emergent writing, Matthew  learns what writers do and that writing has a purpose.

Matthew was not feeling well on this particular day.  Mom talked about making an appointment to see the doctor.  She brought out the contact information and phone number for the doctor…Dr. Wells.  As with most children with significant disabilities, vision testing is not always possible, however, here we can see that at this moment Matthew was able to use his vision to take in the information.

Matthew had visited a firehouse and got to sit up in the fire truck.  After almost a year of daily emergent writing opportunities, we can see that his writings are changing and becoming more deliberate.  Through his beginning use of spaces, he showed us that he is aware of words.

Writing has been a way to assess the impact of the emergent literacy activities that he and his mother have engaged in on a daily basis.  Activities have included shared reading to build background knowledge, vocabulary, and concepts about print, while learning how to use an AAC device.  Other opportunities have included writing books, working with different genres of text, alphabet activities, and sound awareness activities. 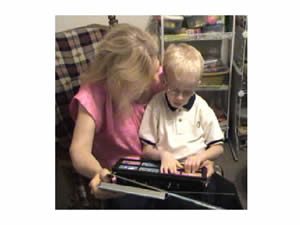 Learning to use a communication device during shared reading 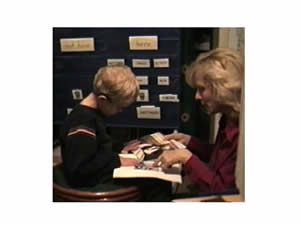 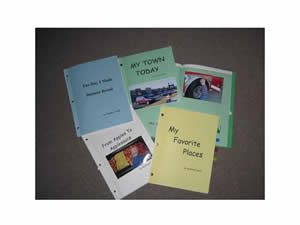 Introduction of a High-Tech Dedicated AAC System
Until this point, Matthew had used a single message device and an 8-location device for communication.  Very quickly, it became apparent that his current AAC devices would not offer him the breadth of vocabulary.  Matthew was evaluated for a formal AAC system.  The team recommended a dedicated dynamic screen display device that had high visual and auditory feedback to meet his sensory needs.  The device also had an ample amount of vocabulary that would support his growth as a reader and a writer.

Using a Dynamic Screen Display AAC Device as a ” Pencil”
To support his literacy development, the suggested AAC device could act as a keyboard when interfaced with the computer.  On the AAC device, Matthew had access to a full keyboard, high frequency word banks and pre-programmed phrases.  Whatever Matthew selected would go directly into an open program on the computer, i.e. IntelliTalk, Write Outloud, Microsoft Word etc.  This allowed him to write with the contents of his device–an ideal way for him to learn about the device.  Matthew used this “pencil” for his daily self-selected writing.

Self-Selected Writing
Allowing children to choose what they want to write about is an easy way to motivate children to write and to write alot.  With Matthew, self-selection was done by offering choices of things he cared about.   Mom frequently used pictures, memory books and verbal choices.  She was always careful to include a message that would let her know he wasn’t interested in the current choices, such as “more ideas” or “none of these.”  The topic that Matthew selected provided a context for the adults to interpret the writing. Knowing the context was a way for adults to encourage and interact with Matthew about his writing.

Matthew enjoys going to the library.  Mom provided additional context: eating is a highly stressful activity.  On this particular day, he could not go to the library until he finished his fruit.  Based on the order of entries, he began with words, then went to the keyboard, and then returned to the word banks.  Matthew is exploring and learning to go back and forth between the two separate areas on his AAC system.

Self-Selected Topic:  Going to the Library

Given this information, we can see the beginning of Matthew writing words relevant to a topic that he has chosen-a very exciting development.  Whether or not this was what he had intended, his mother took this writing, celebrated it and used it as a teaching opportunity.  Similar to what mothers’ of typically developing children do, together they showed everyone his writing, they talked about his writing and mom attributed meaning to his every attempt.  Matthew is beginning to learn that writing can be used to express his ideas.

One of Matthew’s favorite activities is to go outside.  Writing with his AAC system, he has included single words, letters and a pre-programmed phrase.  The phrase, “The weather is sunny,” has some relevance to his topic.  His attempt demonstrates a common response that AAC users often make.  When they don’t know where the vocabulary is, or if it not available, they tend to use the next closest vocabulary.  In Matthew’s case, he chosen a pre-programmed phrase.

On a recent vacation, Matthew and his family stayed in a hotel.  Matthew loves swimming and frequently followed the hotel signs to the pool.  Similar to the Dr. Wells writing sample, Matthew spells something that he has seen at the hotel, demonstrating his awareness and knowledge of environmental print.  He also chose words that are related to hanging out at the pool.  Matthew’s writing continues to serve as window through which we can look at understandings not only about writing but, about the world.

How many good music awesome
very good
let’s you’re welcome I love how many sit
sunny teacher….what good good how
much were a very good a cracker sunny lie
down people

In comparison to July 2004, it is clear that Matthew’s writing has reached a new level of sophistication.   Continuous opportunities for independent experimentation with the whole alphabet, words and phrases have paid off.  Previous writings have required explanation of the context to make sense.  For this writing sample, very little explanation is required…On a sunny day, they went to a music concert, sat on a blanket and enjoyed it.  His teacher came along.  And, Matthew ate Chex Mix for the first time and liked it!

While recognizable words are still not present, Matthew’s writing continues to change.
In the fall, he is beginning to show us that he has emerging knowledge that letters are related to specific sounds.
In his spring samples, his word approximations continued to become more sophisticated as he represents words with their initial consonant.
Given the fact that Matthew is unable to make letters sounds or sound out words, emergent writing has been one way to assess his growing letter knowledge.

Given the fact that Matthew demonstrated an early understanding of specific letter-sound relationships, phonics instruction was started.  Making Words (Cunningham & Hall, 1994, 1997; Cunningham, 2000), a spelling based phonics program, was used.  During these lessons, students use 5-7 letters to make many different words.  Students learn to hear individual letters sounds in words and learn to represent them in spelling.  The lessons also teaches students about common spelling patterns in words.  Additionally, Making Words does not require any speech—an essential feature for students who are unable to speak.
During this lesson, Matthew used o, n, s, t, w.  He has already made the words: on, no, so, son.  Here, Matthew was asked to make the word “won.”  He does this and is then asked to turn “won” into “ton.”  After moments of intense, quiet studying…success!

In reviewing Matthew’s dramatic changes over the past 3 years, we can see similarities to the early writing development of typically developing children.  Matthew’s beginning writing is random and inconsistent but, gradually change to writing that is more deliberate.  It is critical to know that for the days when his writing showed this change, there were just as many days where his writing returned to a less sophisticated, random state.  Because of this inconsistent performance, specific day-to-day progress has been difficult to document.  However, assessment over time has offered a more accurate understanding of the growth Matthew has made.  With instruction and continued daily opportunities to freely write, Matthew’s days of random, exploratory writing will continue to decrease, and his days of more recognizable writing will continue to increase as he works hard to acquire and eventually solidify these important concepts.