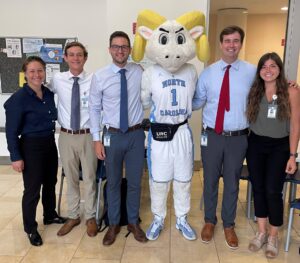 Late June each year, the Department’s PGY1s begin residency with a great interest in their chosen field of orthopaedics. However, they are armed with only the limited knowledge that they received in medical school. Stepping into this newfound role as physicians in training, first-year residents lack critical orthopaedic surgery skills to perform direct patient care on Day 1. UNC Orthopaedics joins specialties across UNC School of Medicine (SOM) that facilitate a specialty-intensive “boot camp” when a new class of interns arrives in late June to begin their training. 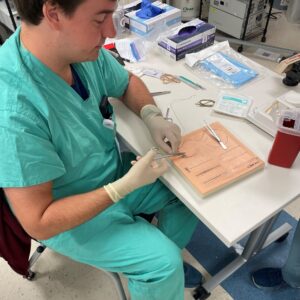 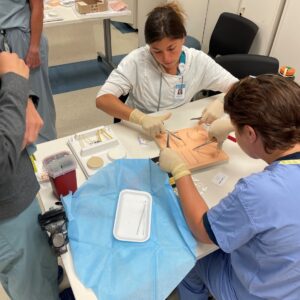 At boot camp, UNC Orthopaedics interns hone their skills and prepare for the OR and clinical procedures by availing themselves of all the Orthopaedic Skills Lab has to offer, including simulation training (SIM Labs). The Orthopaedic Skills Lab houses a simulator with exercises developed by the University of Iowa that score interns at boot camp following their demonstration of a range of skills, including hip pinning in adults, placement of sacroiliac screws, and using a model to perform pinning of pediatric supracondylar humerus fractures. Compartment syndrome simulation additionally shows new trainees how to correctly measure pressures in the four compartments of the lower leg. Industry support enables boot camp facilitators to additionally teach interns dry arthroscopy using simulation models. 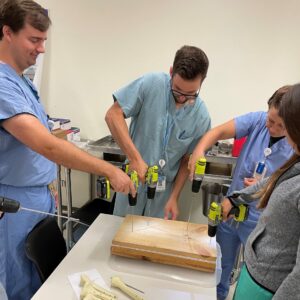 Dr. Ostrum noted: “The old paradigm of ‘see one, do one, teach one’ has been replaced by simulation prior to performing operative procedures. Studies have shown an increased proficiency in residents using simulation. In addition to the performance of exercises, considerable time at SIM Lab sessions is invested in indications, possible complications, and pearls, as well as pitfalls. Residents and interns uniformly rate their SIM Lab experiences as excellent. We continue to improve our residents over five years of training and watch them progress as they become competent and confident orthopaedic surgeons.”