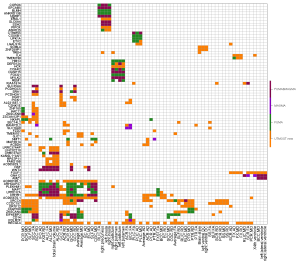 Brain structural traits are highly heritable and have been linked to disease. Here the authors have used gene expression data to perform a transcriptome-wide association study on 211 brain structural traits, discovering 273 associated genes. We further validated the discovered genes using multiple methods. The paper was published in Nature Communications, and was jointly supervised by Prof. Hongtu Zhu and Prof. Yun Li.(https://www.nature.com/articles/s41467-021-23130-y)

Variations in brain structure and microstructure across individuals are associated with many neurological and psychiatric (referred to as neuropsychiatric hereafter) traits. Structural neuroimaging traits have shown moderate to high degree of heritability in both twin and population-based studies. In the past decade, genome-wide association studies (GWAS) have been conducted to identify the associated genetic variants (typically single-nucleotide polymorphisms [SNPs]) for brain structures. In addition to GWAS, Transcriptome-wide association studies (TWAS) can both prioritize these GWAS findings and also identify additional gene-trait associations.

In this work, we performed TWAS analysis for 211 structural neuroimaging traits including 101 ROI volumes and 110 DTI parameters. As these brain-related traits tend to be highly polygenic and are related to many traits across a range of categories, we used a cross-tissue (panel) TWAS approach (UTMOST) in our main analysis.

We validated the discovered genes using multiple methods, including conditional analysis, Chromatin interaction enrichment and colocalization. We further  explore the gene-level genetic overlaps among brain structure and other traits, finding that 112 of the 278 cross-tissue TWAS-significant genes of neuroimaging traits were also significantly associated with one or more of 14  complex traits and clinical outcomes (e.g., vascular risk factors, brain functions, neuropsychiatric disorder/diseases)

Additionally, we explored the predicting potential of TWAS using gene-based polygenic risk scores analysis, and then revealed the power of its predictive power. We also included both GWAS and TWAS PRS together as predictors in one linear model to predict the TWAS-significant ROI volumes. Compared to the linear model with TWAS or GWAS PRS only, we found that the prediction accuracy was improved for most ROIs when using both of the two types of PRS.

In conclusion, our study illustrates that TWAS can be a powerful supplement to traditional GWAS in imaging genetics studies for gene discovery-validation, genetic co-architecture analysis, and polygenic risk prediction.