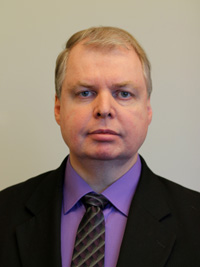 Dr. Palsson is a clinical psychologist and health researcher with a long-standing interest in the relationship between mind and body in the determination of health and illness. He is originally from Iceland. He received his doctoral degree in clinical psychology from Eastern Virginia Medical School in 1993, and completed post-doctoral fellowship training in behavioral medicine at UNC-Chapel Hill in 1994-1996. Dr. Palsson then established and directed a behavioral medicine clinic and research program at Eastern Virginia Medical School from 1996-2000, where he was Assistant Professor of Psychiatry and Family Medicine. He returned to the UNC Center for Functional GI & Motility Disorders in 2001 to participate in the Center’s research.

Dr. Palsson’s current research interests include investigation of the psychological and physiological aspects of gastrointestinal disorders and symptoms, development of questionnaires to improve GI research, and the use of psychological treatments for IBS and other functional GI disorders. Additionally, he investigates predictors of therapeutic responses to clinical hypnosis and other psychological interventions, and the role of interplay between conscious and non-conscious mental functions in creativity, health problems, and anomalous experiences.

Dr. Palsson is an internationally recognized expert in the use of hypnosis for gastrointestinal disorders. He developed a unique standardized hypnosis treatment protocol for treating irritable bowel syndrome, which has been tested in a number of published studies and is used by hundreds of clinicians throughout the U.S. and in several other countries. He has also trained numerous healthcare professionals across the U.S. in the use of hypnosis for medical problems.

Dr. Palsson has a long-standing interest in the use of Internet applications to enhance health research. He has extensive experience in Internet software programming. Dr. Palsson has developed innovative methodologies for collecting and processing clinical data in a confidential and secure manner through the Internet, and he has played a lead role in several large-scale Internet-mediated studies of symptoms and health-related factors in patient groups and the general population. Dr. Palsson is also a co-inventor of three patented mind-body technologies that he created in collaboration with scientists at the NASA Langley Research Center in Virginia.

Dr. Palsson has authored more than 120 scientific papers published in medical and psychology journals, as well as numerous book chapters in edited books and a large number of published research abstracts. He serves on the editorial board of three scientific journals, and has received several awards for his work, including an award from the American Society of Clinical Hypnosis for “for significant contributions demonstrating the efficacy of hypnotic interventions in psychophysiological disorders” and a runner-up prize with his colleagues at NASA in NASA’s 2005 Invention of the Year Awards.

Irritable bowel syndrome and other functional gastrointestinal disorders; the use of clinical hypnosis in the treatment of medical problems; psychological aspects of physical health problems; questionnaire development for health research; utilization of Internet software applications to improve health and facilitate medical and psychological research; predictors of therapeutic response to psychological interventions; and the role of interactions between conscious and non-conscious processes in creativity, health vulnerabilities and anomalous life experiences.