The inaugural Core Facility Staff Recognition Awards (April 2022), sponsored by the UNC School of Medicine Office of Research Technologies, received a thoroughly impressive list of nominations. Thank you to all who took time to nominate a core facility employee–all nominees should be proud of their contributions to research here at UNC. “Our core staff are a critical asset to our research infrastructure here at UNC.” says Dr. Blossom Damania, Vice Dean for Research and Boshamer Distinguished Researcher in the UNC School of Medicine. “Their performance excellence, technical achievement, and customer service really exemplify what makes our collaborative environment here at UNC so special. I am thrilled to establish this award to honor the winners and all the nominees to show our appreciation for their hard work and dedication.”

We are excited to present our category winners and runners-up–keep an eye out for special features on each category winner to follow over the next month at: https://www.med.unc.edu/corefacilities.  The next Core Facility Staff Recognition Award will be open for nominations in November! 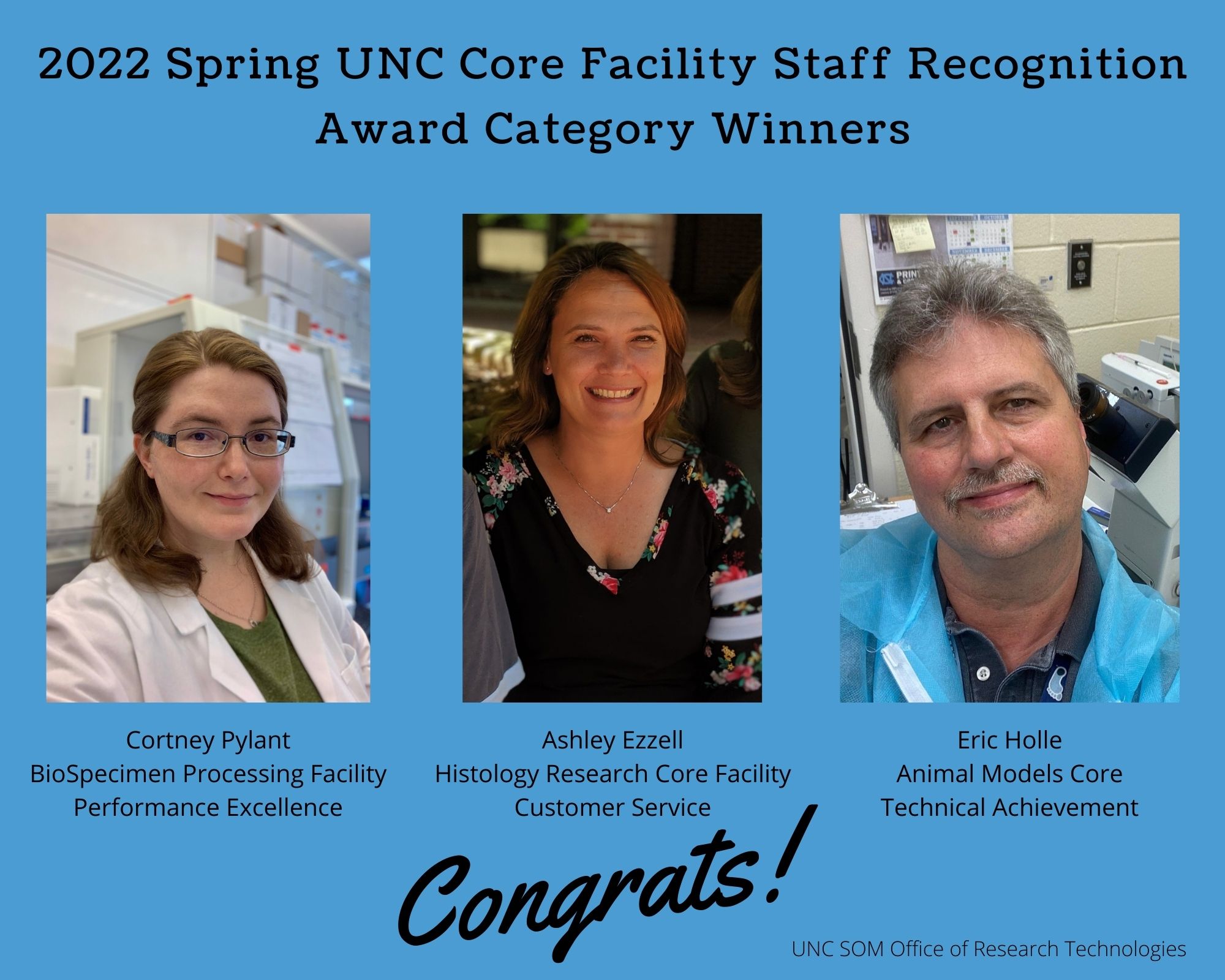 Cortney was nominated by her supervisor Patricia Basta, the Director of the BioSpecimen Processing Facility. Cortney’s nomination letter highlighted the effort and initiative she puts into learning new skills, both technical skills for specific novel projects and in general lab management skills, such as rebuilding equipment and assisting in grant writing efforts. Cortney also leads the core in rigor and reproducibility efforts. She ensures the accreditation documentation is fully updated and builds, maintains, and trains other staff on lab SOPs. The nomination also spoke to Cortney’s ability to create and work within teams, specifically citing her involvement and leadership with her colleagues in other core facilities and her exceptional role as a trainer and supervisor to other core staff members.

Ashley was nominated by six different individuals and while the nominations spanned multiple categories, every nomination spoke to her exceptional service to her customers. It was emphasized by multiple nominators how helpful and persistent she is with technically difficult projects.  Specifically, Julie Necarsulmer, a graduate student in the Cohen lab, wrote that after her own unsuccessful troubleshooting efforts “I had all but given up on having histology images for my dissertation and manuscript, but because of Ashley and her core facility, I will have plenty of data to show.” Miles Bryan, a postdoctoral fellow also from the Cohen lab, echoed the sentiment, attributing the successful histology and immunohistochemistry critical to his grant to the time and effort Ashley put into his project. He also spoke highly of her effective communication skills, stating “I’ve never had an interaction with a core facility/director that has been this effortless yet fruitful.”

Eric Holle was nominated by his supervisor, Dale Cowley, in the Animal Models Core. The nomination letter spoke to the instrumental role Eric has played over the last 11 years in developing and improving multiple technologies within the core. Furthermore, these technologies and methodologies have become critical services that the core offers and his contributions to individual projects have resulted in multiple authorships on manuscripts. Eric also significantly contributes to the management and training of other core staff members and manages animal colonies on top of his surgical and microinjection duties. Of his win, Eric says “This [win] caught me out of the blue. It makes me feel appreciated and gives me sense of pride…Working for the Animal Models Core (AMC) has been the best job I have ever had.”

We want to acknowledge the selection committee for their time and thoughtful diligence in reading so many nominations: Leslie Fulcher, Christopher Nagy, Ralph House, Diane Weatherspoon, Jennifer Brennan, Kara Clissold, and Christopher Gregory.

Other nominees were as follows: