For 25 years — from 1978-2003 — he served in a variety of leadership roles at UNC, where he was the Herman and Louise Smith Distinguished Professor of Medicine, the first Chief of the UNC Division of Rheumatology, Rheumatology Fellowship Director and Director of TARC. 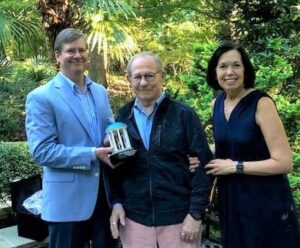 During that time, he was known for his passion for advancing medical research, his dedication to teaching medical students, residents and fellows, and his commitment to providing outstanding patient care.

He was the first director of the NIAMS funded UNC Multidisciplinary Clinical Research Center (now the CCCR). He published over 150 manuscripts in the areas of autoimmunity, lupus and fibromyalgia that have been cited over 8,000 times.

Dr. Winfield had many honors bestowed upon him, including the Kenan Award from UNC, and he was made a Master of the American College of Rheumatology in 2007. Each year, the John B. Winfield, MD Visiting Scholar Award will recognize an outstanding, nationally known investigator who has made significant contributions to the advancement of research in the fields of Rheumatology and Arthritis Research.

Each awardee will be presented with a replica of the UNC “Old Well,” which is engraved with the name of the recipient and the date in which it was awarded.