Trends in Cell Biology published a Spotlight article in the October 2018 edition focused on a recent Cell Reports paper from the laboratory of Bev Koller. 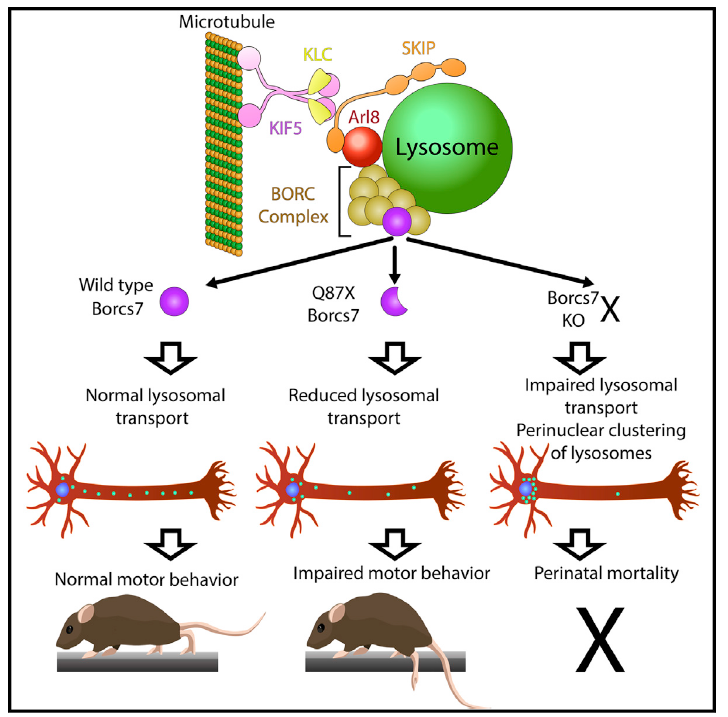 The spotlight article, titled “Lysosomes nor Mice Move Forward without Borcs7” details the paper by Snouwaert et al. that characterized a mouse with a spontaneous mutation in the Borcs7 subunit, which causes axonal dystrophy and impaired motor function.  The paper, titled “A mutation in the Borcs7 subunit of the lysosome regulatory BORC complex results in motor deficits and dystrophic axonopathy in mice” was published in Cell Reports 24 (July 2018), pp. P1254-1265.

The movement of nutrients and waste within neurons is complicated by the relatively long axonal processes in these cells, which in the case of motor neurons may extend the entire length of the spinal cord. Genetic studies in both humans and model organisms have played a central role in defining the proteins critical for the complex intracellular transport pathways that move nutrients and cell waste in both directions along the neuronal axon. A research project at UNC that has provided a deeper insight into the function of one of these proteins began when Beverly Koller, PhD, Assistant professor in the UNC School of Medicine Department of Genetics, noticed several mice in one of her colonies that developed difficulty in walking as they aged. With help from a diverse set of skills provided by colleagues and core facilities at UNC, her lab was able to begin to unravel the genetic, molecular, and cellular bases of the mice’s unusual behavior.

Sheryl Moy, PhD, Director of the Mouse Behavioral Phenotyping Core, provided the expertise and facilities necessary to better define the nature and time course of the behavioral deficits present in the mice, while Victoria Madden, an Electron Microscopy Specialist in the Microscopy Services Laboratory, provided the first look at the spinal cord neurons of the affected mice, showing swollen axons full of cellular debris. Diane Armao, a neuropathologist in the Department of Radiation, helped with the interpretation of the pathological changes observed in the motor neurons of the mice, which are reminiscent of those seen in human neurodegenerative disorders such as hereditary spastic paraplegia and neuroaxonal dystrophy. The genetic defect underlying the behavioral deficits and axonal degeneration in the mice was identified using traditional genetic studies followed by sequence analysis by Piotr Mieczkowski, PhD, Director of the High-Throughput Sequencing Facility. The affected mice were shown to carry a single point mutation in the gene encoding a protein called BORCS7, which results in expression of a truncated version of the protein. To verify that the BORCS7 mutation was the underlying cause of the phenotype observed in the mice, a BORCS7 null mouse line was generated with the help of Kim Kluckman in the Animal Models Core. Mice carrying the truncation mutation were then bred to mice carrying the null BORCS7 allele, and offspring carrying a single copy of each type of mutant allele were shown to display the originally observed behavior deficits, thus proving that the deficits are the result of the BORCS7 mutation.

Insight into the molecular and cellular mechanisms that link the mutation in Borcs7 to the behavioral and neurodegenerative changes observed in the mice was provided by Damaris Lorenzo, PhD, Assistant Professor in the Department of Cell Biology and Physiology. Using her expertise in live imaging of neurons, and the resources of the Microscopy Core of the Neuroscience Center, Dr. Lorenzo was able to show that the truncation mutation interferes with the ability of neurons to move lysosomes down their axons, away from their cell bodies. Given the relatively long axons present in many motor neurons, in is not surprising that these cells would be impacted most severely by a deficit in lysosomal transport. Interestingly, the truncation mutation had no apparent effect on the movement of lysosomes in macrophages, where BORCS7 is also highly expressed. As lysosomal dysfunction has been shown to play a role in a number of neurodegenerative diseases, further studies with mice expressing truncated BORCS7 may provide new insights into the molecular and cellular mechanisms underlying these disorders.