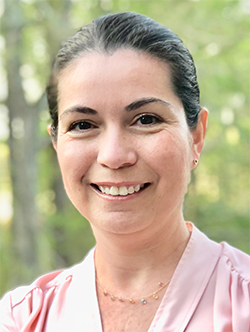 Dr. Adriana Beltran has been promoted to Associate Professor in the Department of Genetics, effective July 1, 2021.

Dr. Beltran earned a B.S. in Bio-Pharmaceutical Chemistry from the Autonomous University of Baja California in 1999 followed by a Ph.D. in Marine Biotechnology from CICESE Research Institute, Ensenada, Mexico in 2005.  Dr. Beltran continued training as a Postdoctoral Fellow in the Department of Pharmacology at UNC Chapel Hill (2005-2009).  Dr. Beltran was appointed Research Assistant Professor in the Department of Pharmacology at UNC Chapel Hill in 2009 and became the Director of the Human Pluripotent Cell Core Facility in 2016.  Recently, Dr. Beltran was appointed as Research Assistant Professor in the Department of Genetics in December 2020.  Dr. Beltran’s research has focused on combining her expertise in induced pluripotent stem cells (iPSCs), genetic engineering, cell differentiation and organoids to develop physiologically relevant cellular models that aim to study the molecular mechanisms aberrantly dysregulated in disease, and to further use that information to develop more effective therapies.  Dr. Beltran has successfully generated iPSCs from many neurodevelopmental rare diseases in support of other investigators at UNC. These cellular models include Cerebral Cavernous Malformation, Alexander disease, Giant Axonal Neuropathy, Epileptic Encephalopathy, Alzheimer’s disease and Down Syndrome.  Dr. Beltran is an active lecturer for courses in Pharmacology and Genetics and a committed mentor for undergraduate and graduate students.  Dr. Beltran served as a member of the UNC Faculty Council for seven years.  She was recently accepted into the UNC SOM ACCLAIM leadership program.