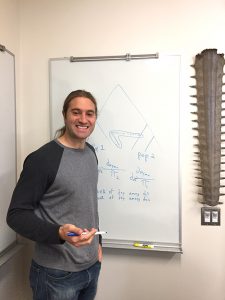 As an undergraduate, Dan studied Computer Science at Indiana University. During this time he became interested in genomics and bioinformatics. For his PhD, he joined the lab of Matt Hahn (also at Indiana University), majoring in both Bioinformatics and Ecology, Evolution, and Behavior. During this time, his work focused on elucidating the evolutionary forces acting on genomic copy number variants—large regions of the genome that are found in different multiplicities across individuals as a result of duplication or deletion events.  For his postdoc, Dan worked with Andy Kern at Rutgers University where he studied the population genetics of adaptation and worked to uncover the impact of natural selection on patterns of diversity in human populations.

The Department of Genetics is pleased to welcome Dr. Schrider!