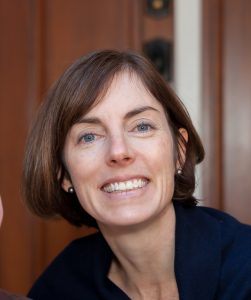 Julianne O’Daniel was promoted to Clinical Associate Professor in the Department of Genetics, effective January 1, 2020.

Julianne received her BS in Biology from UNC Chapel Hill followed by an MS in Genetic Counseling from University of Pittsburgh Graduate School of Public Health. She served as a Genetic Counselor at Duke (1999-2001) and in the Maine Pediatric Specialty Group (2001-2002). She returned to Duke where she served as Associate Director of the International Genetics Training Program (2002-2004), Assistant Director of Educational and Training Program (2004-2008) and as an Associate in Research (2008-2010). Julianne was a Clinical Genomics Liaison with Illumina, Inc. (2010-2013) before joining UNC Department of Genetics as Clinical Assistant Professor in 2013. She currently serves as the Director of Genetic Counseling for the UNC Clinical Program in Cancer and Adult Genetics. Julianne has published more than 35 peer-reviewed papers and in 2018 was named as “Influential in Profession” at the National Society of Genetic Counselors Annual Education Conference. Congratulations to Julianne!