The title of the article, published in PNAS, is “Lack of pairing during meiosis triggers multigenerational transgene silencing in Caenorhabditis elegans.” Co-first authors are Luciana Leopold, a graduate student in the Curriculum in Genetics and Molecular Biology, and Bree Heestand, a postdoctoral fellow in Shawn’s lab. 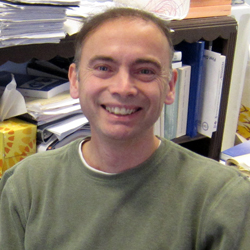 This silencing process can occur for transgenes that are maintained in a hemizygous state for several generations. Small RNA induced epigenetic silencing (RNAe) is promoted by the Piwi Argonaute protein PRG-1 and associated Piwi-interacting RNAs (piRNAs), along with other proteins. Multigenerational RNAe is capable of silencing single-copy transgenes that lack perfect piRNA target sites and can be triggered by a lack of chromosomal pairing during meiosis for multiple generations. It is also reversible, in contrast to the previously recognized RNAe mechanism.