Through the Salber-Phillips Award, the UNC School of Medicine recognizes second through fourth year medical students for their community-oriented projects that improve the health or well-being of older adults who are 65 or older.

The careers and lives of Harry Phillips and Eva Salber were epitomized by their empathy and compassion. In addition, they were deeply committed to the health of all people, particularly those who are disregarded and underserved. As such, their work endeavored to address the social, political, and economic determinants of health and disease. On top of that, their work was characterized by a broad community-based approach to health.

To foster and recognize these values in young physicians, Dr. Phillips established the Salber-Phillips Award in 1993.  Through the recognition of these students and their projects, the commitment of Eva Salber and Harry Phillips to the health of all people, especially those in rural and underserved communities, lives on.

The legacy has been carried on by the Phillips children since their father’s passing in 2004.

Eva J. Salber and Harry T. Phillips grew up and met in Cape Town, South Africa, where they both earned M.B.Ch.B. degrees (the equivalent of an M.D.in the U.S.) in 1938. They later earned post-graduate Diplomas in Public Health (DPH) and Doctorates in Medicine (M.D.) also from the University of Cape Town. In 1956, they emigrated to the United States with their four young children.

After teaching, conducting research, and directing community health centers in Boston, Massachusetts, Drs. Phillips and Salber moved to Chapel Hill, North Carolina in 1971. At the University of North Carolina, Dr. Phillips became the Head of the Health Systems Agencies training program within the School of Public Health. And in 1979 he became the School’s first Director of the Program on Aging. Although he retired in 1983 as emeritus Professor of Public Health, he continued to teach as an adjunct professor, with a particular emphasis on gerontology and healthy aging. 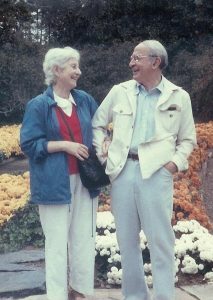 In North Carolina, Dr. Salber was a Professor of Community and Family Medicine at Duke University School of Medicine (1971–1982). There she directed a Community Health Models Program and established a community health facilitator’s training program. Also, she had a special interest in social medicine, healthy aging, and the lives and values of rural elders living alone. And she enjoyed mentoring young medical students, particularly young women striving to manage careers and families.

Drs. Salber and Phillips stayed married for 51 years until Eva’s death in 1990. Dr. Phillips passed away in 2004, and until his death remained actively involved with the Salber-Phillips award ceremonies. Currently, the Phillips children are now continuing the legacy of Eva J. Salber and Harry T. Phillips by recognizing medical students who strive to improve the health and well-being of adults over 65.