“Agency as a framework for thinking of neuropsychiatric disorders” The development of new therapeutic methods for intervening in brain function have the potential to influence a person’s autonomy and authenticity. In order to determine whether or not this is the case, we need an assay that can measure aspects of agency before and after neurointervention. Here I introduce a framework for thinking about agency as a multidimensional construct, and for conceiving of neuropsychiatric disorders as occupying particular regions in an agency space. We develop an Agency Assessment Tool (AAT) using survey methods. I present preliminary results from the project that suggest that different disorders can be identified with the  AAT, which is able to discern control and patient groups, and discuss the prospects for using data-driven tools to come up with ontologies of agency. “Who We Grieve For—And Why” In this lunch and learn talk, Professor Cholbi will discuss his recent book Grief: A Philosophical Guide (Princeton University Press, 2022). 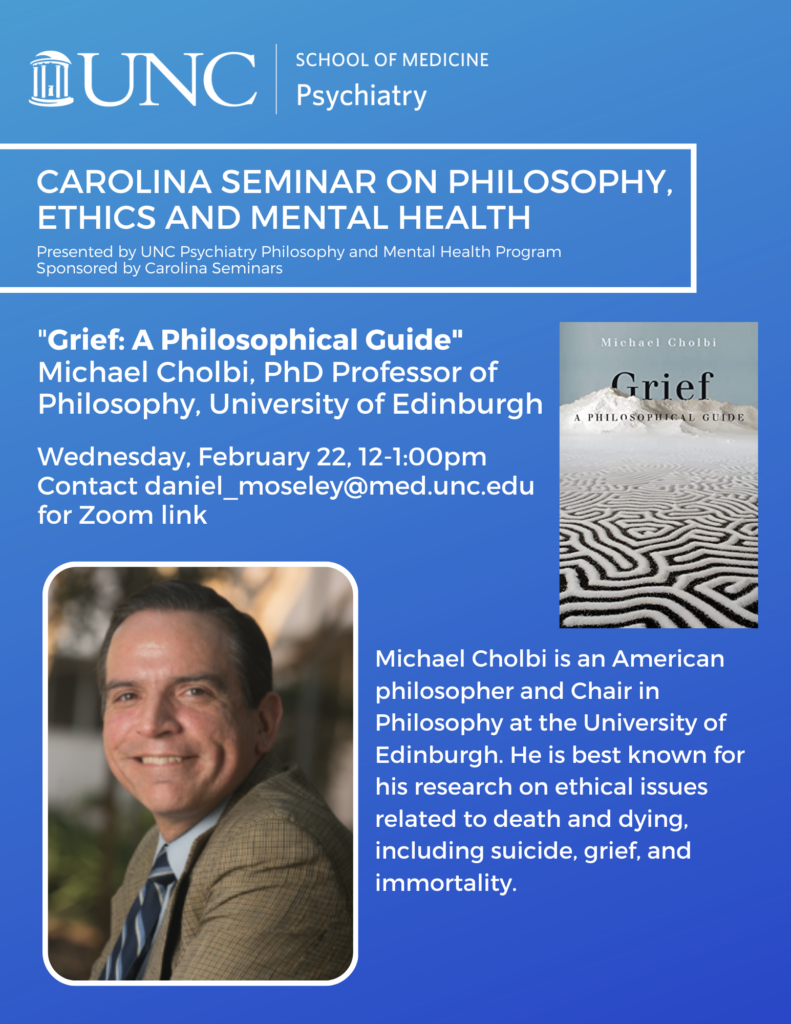 “Mindfulness and Moral Emotions” Many people (particularly Buddhists) believe that being a mindful person is generally a morally good way to be. But this idea appears to conflict with common intuitions about moral emotions—particularly blaming emotions like guilt and resentment—and makes it look like being a mindful person might sometimes make one morally worse. In this paper, I reconcile this tension by (i) presenting a secular (though Buddhism-compatible) account of mindful moral emotion and (ii) arguing that under this account mindful moral emotions do not carry their apparent moral costs, or at the very least such costs are compensated by comparable moral gains. Along the way, I argue that key assumptions motivating the apparent tension are ultimately misguided, while gesturing at ways in which mindful moral emotions (and mindful moral emoters) are plausibly better than their non-mindful counterparts. In the end, I show that you can be a mindful blame-embracer without risking any virtue. Relevant Events at UNC and Beyond