In a new pre-clinical study published today in the journal Breast Cancer Research and Treatment, researchers from the Parise lab show they can exploit cancer’s reliance on a particular protein to help fight triple negative breast cancer. They believe the protein could be a potential new drug target.

By exploiting cancer cells’ addiction to a particular protein, UNC Lineberger Comprehensive Cancer Center researchers believe they can better target and attack those cells in an aggressive form of breast cancer.

In a pre-clinical study published today in the journal Breast Cancer Research and Treatment, researchers show the potential of a protein CIB1 as a new drug target. By deleting the protein using genetic engineering, they found they could kill certain cancerous cells in cell samples and decrease tumor growth in mouse models. They believe that CIB1 could be a potential new drug target for triple negative breast cancer.

“We think that cancer cells become addicted to CIB1 for their survival, so when we remove CIB1 from susceptible cancer cells, they can no longer survive,” said Leslie Parise, PhD, a UNC Lineberger member and professor and chair in the UNC School of Medicine Department of Biochemistry and Biophysics. “We believe that this protein could be a potentially safe therapeutic target for triple negative breast cancer, and the future could bring drugs that specifically target this protein to kill breast cancer cells.”

“We think there is a synergy that occurs from the loss of these two cancer-causing pathways, and when both of them are turned off at once, we observe a catastrophic death of cancer cells,” Parise said. “This approach may be less toxic to other, non-cancerous cells because the other cells are not addicted to CIB1.”

The authors chose to focus on studying potential treatments for triple negative breast cancer in particular because it is a particularly aggressive and difficult-to-treat breast cancer subtype, and there is currently a lack of targeted treatment options for it. 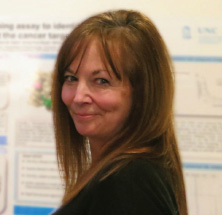 Dr. Tina Leisner, research associate in the Parise lab provided important groundwork for the present study (as published in Oncogene), as well as other key observations that were included in this paper. Of note, she first identified that CIB1 depletion shuts off two oncogenic signaling pathways that commonly drive the uncontrolled growth of cancer cells. This initial observation was made in several cancer cell lines, including one triple negative breast cancer cell line which prompted us to further examine a broader role of CIB1 in triple negative breast cancer. “CIB1 is a unique target because it is not an oncogene, nor is it an enzyme, yet it appears to have a crucial role in triple negative breast cancer tumor growth,” said Justin Black, a doctoral candidate in the Department of Biochemistry and Biophysics and the study’s first author. The researchers believe their findings lay the foundation for further studies of this protein as a potential drug target for triple negative breast cancer. To help translate their discovery, they (Drs. Leslie Parise and Tina Leisner, and Justin Black) have started a new company called Reveris Therapeutics in partnership with the University of North Carolina at Chapel Hill’s Carolina Kickstart. The program provides support for UNC faculty to commercialize biomedical discoveries.

The study was supported by grants from the National Heart, Lung and Blood Institute, NC TraCS, the American Heart Association, the Triple Negative Breast Cancer Foundation, the NCI Breast SPORE program and the N.C. Biotechnology Center.