Dr. Barnett was born and raised in a small town in eastern Kentucky, and attended college and medical school at the University of Kentucky. She fell in love with the neurosurgery program at UNC after witnessing the camaraderie amongst the residents and hearing about the well-rounded nature of all the faculty both in and outside of work.

Dr. Barnett is currently interested in pursuing a fellowship in pediatric neurosurgery. Her research interests include pediatric hydrocephalus and epilepsy. Outside of work, she enjoys going to the beach, hiking, and spending time with her family. Last August, Dr. Barnett and her husband welcomed their first child, a baby girl, to their family.

Dr. Piazza grew up in the suburbs of Washington, DC and graduated from Princeton University with a degree in Chemistry and Materials Science and Engineering prior to moving to North Carolina for medical school at Wake Forest School of Medicine. It was there that he discovered neurosurgery. Between his 3rd and 4th years of medical school, Dr. Piazza spent a year at the NIH/NINDS Surgical Neurology Branch through the Medical Research Scholars Program where he studied brain tumor associated edema models with the goal to better understand intraoperative drug delivery systems. He chose to stay in North Carolina for residency at UNC because during his residency interview, he was impressed by the unparalleled collegiality among the attendings and residents. He was also impressed that the leadership at UNC has a unique educational environment focused on helping develop the well-rounded neurosurgeon while also individualizing opportunities to reach each trainee’s career goals; these continue to remain true today.

Darshan Shastri, MD
Darshan Shastri is a fourth year neurosurgery resident who grew up in New Jersey. He went to Johns Hopkins University and attained a Bachelor’s degree in Neuroscience. He obtained his Master’s Degree in Medical Sciences from Boston University and attained his medical degree from Rutgers New Jersey Medical School. He was elected to Alpha Omega Alpha Honor Society as a junior and received the Merck Award for Academic Excellence for graduating at the top of his class. Dr. Shastri is one of the neuroendovascular fellows for 2021-2022, an enfolded fellowship with UNC Neurosurgery that he will complete during his PGY5 year. His interest is in cerebrovascular and endovascular neurosurgery and he has published research on hemodynamics of aneurysm formation as well as various endovascular therapies.

He has an interest in furthering resident education and has worked to create transition to intern year and PGY-2 handbooks as well as working to secure a grant funding anastomosis training microscopes for all residents in the program to practice microsurgical techniques at home. Outside of work Dr. Shastri loves spending time with his wife and their rescue dog, Queso.

Prior to medical school, Dr. Quig served in the marines for four years. He graduated from medical school at the University of North Carolina and knew that he wanted to stay at UNC for residency training because of the collegial and educational environment created by UNC’s leadership. Dr. Quig is one of the neuroendovascular fellows for 2021-2022, an enfolded fellowship with UNC Neurosurgery that he will complete during his PGY5 year. He also plans to pursue further fellowship training in skull base and open vascular neurosurgery following residency training.

Andrew Abumoussa, MD, MSc
Born in Egypt, Dr. Abumoussa and his family ultimately found their way to Hendersonville, NC. As an undergraduate at UNC, he studied math and computer science. He worked as a software engineer building smart home technology for assistive living after graduation and went on to study high performance computing and artificial intelligence in graduate school. He returned home  for medical school and neurosurgery residency. His interests include complex spine and neuroprosthetics.
Currently, in his free time, he is trying to learn the piano with his wife and daughter.
For recent publications, visit Dr. Andrew Abumoussa’s PubMed listing.

Dr. Chamberlin grew up in Petaluma, California. The first in her family to attend college, she earned a bachelor’s degree in neuroscience from UCLA. She went on to graduate medical school from the Frank H. Netter MD School of Medicine at Quinnipiac University. Her passion for neurosurgery was sparked by mentorship from neurosurgery faculty at Yale University. Dr. Chamberlin’s interests in neurosurgery are broad and include brain tumors, pediatrics, and neurocritical care. She currently serves on the Neuro-ICU Quality Improvement Committee.

Dr. Chamberlin participated in the couples match with her husband, who is a pathology resident physician at UNC. In her time away from the hospital, she enjoys spending time outdoors with her husband and their rescue pit bull, Chance.

Samuel Reed, MD
Dr. Reed was born and raised just down the road from Chapel Hill, in Winston-Salem, NC. He’s a Tar Heel through and through, having attended the University of North Carolina at Chapel Hill for both his undergraduate and medical school education. His interests in neurosurgical subspecialties are still being formed, but he particularly enjoys vascular surgery and skull base surgery.

Outside of neurosurgery he loves running and hiking with his wife and two dogs.

Dr. Gelinne was born in Monterey, CA but was primarily raised in Burke, Virginia. He graduated from the University of Rochester with a Bachelor of Science in Biomedical Engineering. Following college, he spent five years in the US Navy as a Nuclear Engineering Officer before making the decision to return to medical school. He received his MD from the Larner College of Medicine at the University of Vermont.

He is particularly interested in integrating his engineering background to come up with innovative solutions to neurosurgical problems. Though undecided, he is interested in spine and vascular neurosurgery. During his free time, he enjoys windsurfing and spending time with his wife and daughter. 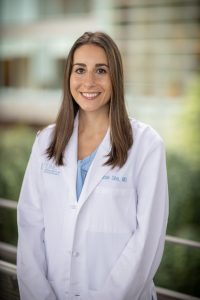 Dr. Silva was born and raised in New Jersey. Her parents immigrated from Portugal and she prides herself in being a first generation American and the first person in her family to become a physician. She attended University of Pittsburgh in Pittsburgh, PA, receiving a Bachelor of Science in Neuroscience. She returned to her home state to pursue medicine, attending Rutgers New Jersey Medical School. Nicole earned her MD in 2020 with a distinction in Global Health, where she focused on immigrant and global health of Portuguese-speaking populations. She was inducted into the Gold Humanism Honor Society and received the Edward J. Ill Excellence in Medicine Scholarship as a fourth-year medical student.

Her research interests include global neurosurgery, specifically working with neurosurgery departments in Amazon region of Brazil, public health, reducing gender and minority disparities in neurosurgery, vascular and neurotrauma. Dr. Silva enjoys spending time with family and friends, indulging in Portuguese and Brazilian foods and music, planning her next travel destination, and spending weekends at the beach. 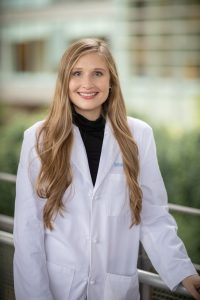 Dr. Andrews grew up in a small town in Oklahoma and attended Oklahoma State University, where she received a Bachelor of Science in Biochemistry as well as Microbiology, followed by medical school at the University of Oklahoma. Having lived in Suriname, South America as a child and experiencing firsthand the effects that lack of proper health care can have on a society, Dr. Andrews became interested in pursuing a career in the field of medicine at a young age, particularly global health opportunities and working with underserved populations. As a medical student, she was introduced to neurosurgery and was immediately drawn to the field.

Her hobbies include dance and the performing arts, spending time with family and friends, trying new foods, traveling, and barre workout classes. Dr. Li was born in Nanjing, China and grew up on the Florida space coast. She attended Cornell University where she graduated with Bachelor degrees in Biology and English. While earning her medical degree at New York Medical College, she served as Vice Chair of the Medical Society of the State of New York – Medical Student Section and was involved in advocacy and public policy initiatives. In medical school, she also grew her passion for neurosurgery, conducting and publishing research focusing on prognostication and management of aneurysmal subarachnoid hemorrhages. Upon graduation, she received the Department of Neurosurgery Academic Award.

Her current interests include pediatric and vascular neurosurgery, medical student education, and social and healthcare advocacy. In her free time, she enjoys cooking and baking, creating art and music, and spending time outdoors. 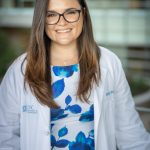 Dr. Jackie MacDonell grew up in Miami, FL. She received her Bachelor’s Degree in Molecular Biology from Stetson University and subsequently worked as a research coordinator at Jackson Memorial Hospital. Prior to starting medical school, Jackie also obtained a Master’s Degree in Biomedical Sciences from Barry University. During this time, she also married her best friend and together they had their first child.

After graduating from Barry University, Jackie was accepted into Albany Medical College where she pursued her love for the neurosciences. One of her highlighted research projects was becoming lead author for a project called the Robotic Assisted MRI-Guided Interventional Interstitial MR Guided Focused Ultrasound Ablation in a Swine Model. This became the project she later defended to also earn a Distinction in Research as well as her M.D.

In the last year of medical school Jackie and her husband were blessed with their second child. Now, during Jackie’s free time, they explore the beautiful outdoors and play around the house with their two dogs.

Will UNC’s Neurosurgery Residency Program Prepare me to be a Successful Pediatric Neurosurgeon?