What’s new in the Department of Neurosurgery

Welcome to Our New Physicians!

Dr. Simon Khagi will join the Division of Oncology as an assistant professor on August 31st with a joint appointment in Neurosurgery where he will head up our brain tumor program. Most recently, Dr. Khagi was a neurological oncology fellow at Duke University. In June 2015, he completed a fellowship in hematology and medical oncology from Tufts University School of Medicine after finishing his residency from Dartmouth Medical School. Dr. Khagi graduated from the University of Missouri – Kansas City School of Medicine.

Dr. Michael Fromke joined the Pinehurst Neurosurgery team this summer. Most recently, Dr. Fromke was based at the Eastern Maine Medical Center in Bangor where he was an EMMC-Neurosurgery and Spine Specialist. He received his M.D. at the University of Tennessee-College of Medicine in Memphis, where he also completed his residency in Neurosurgery.

Dr. Kathleen Bradford started with us part-time in early July. She is a faculty member in the Department of Pediatrics and will be working with us on Tuesdays and Fridays to help us further develop a quality program in regards to infrastructure, reporting, and improvement. We are excited about the advances she will help us make.

In addition to our existing clinics in Chapel Hill, Pinehurst and Wilmington, our Peds team will begin seeing patients in Nash this October.

US News and World Report

The UNC Hospitals Neurosurgery and Neurology specialties were recently rated by US News and World Report as high performing, earning scores that fell within the top 10% of analyzed centers.

In addition, UNC Hospitals earned a national ranking of 16th in cancer care among more than 900 hospitals, up from 32nd in 2015. UNC Children’s Hospital ranked 28th nationally for pediatric cancer.

The NC Spine Society awarded a Residency Research Grant of $5,000 to Dr. Michael Catalino. Dr. Catalino will use the grant to research cervical spine fractures in the elderly.

Dr. Sasaki Adams will present a lecture on Brain Surgery through the Ages on Thursday, October 13th at 7pm as part of the Friday Center’s semiannual series titled What’s the Big Idea? Thinking about the Brain. Dr. Albert Hinn and Dr. Bradley Vaughn from the Department of Neurology and Dr. Gary Gala from the Department of Psychiatry will also present lectures in October as part of the series.

On June 9th, Dr. Julie Sharpless, co-presented with Drs. Andrew Greganti and Frances Collichio at the Department of Medicine Grand Rounds about the recently recognized and frequently fatal pituitary complications of immunotherapy for melanoma. 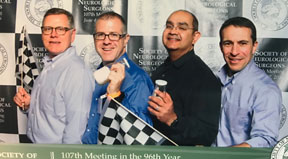 Kristi Hildebrand, MSM, CPNP-AC one of our pediatric nurse practitioners, has completed her NP certification.

Over 130 people attended a banquet dinner in June at the Carolina Inn to honor former residents, Drs. Jason Blatt and Carolyn Quinsey. Dr. Blatt headed off to the Children’s Hospital of Pittsburgh this summer for a one-year fellowship in Pediatric Neurosurgery. Dr. Quinsey drove across the country to begin a one-year pediatric neurosurgery fellowship with Oregon Health and Science University in Portland, Oregon. 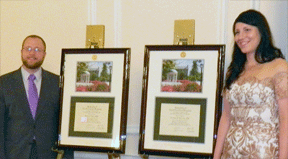 Head for the Cure 5K Recap: On July 16th, several staff, faculty and friends joined a group of 350 runners, walkers, volunteers, donors, sponsors and well-wishers — most participating with one of the 20 Head for the Cure teams supporting a loved one affected by brain cancer. The event grossed nearly $12,000. 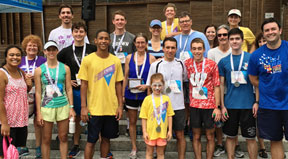 Keep those running shoes handy and join us at the Ellie Helton Memorial 5K, Fun Run and Silent Auction to be held on October 15 at the WakeMed Soccer Park in Cary.